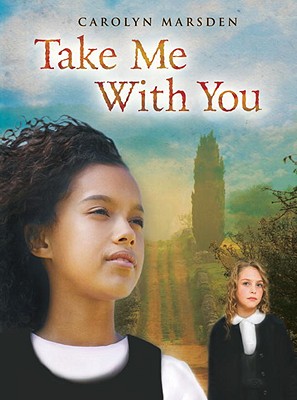 Take Me with You

Hopes of adoption test the friendship of two girls-one biracial-in a lyrical novel touching on themes of identity and the meaning of home.

Pina and Susanna. Susanna and Pina. For as long as they’ve lived at the Istituto di Gesù Bambino — a home for babies abandoned after the War — they have been best friends. As children, they played rag dolls under the watchful eyes of the nuns and hide-and-seek among the lemon trees on the rooftop terrazzo overlooking Naples. But now strangers are coming to the chiesa, couples hoping to adopt children. Susanna thinks Pina — pale, pretty Pina with her gleaming yellow braid — will be adopted at once. Susanna, on the other hand, is a mulatta. Her father was an American soldier, a nero. No Italian has hair or skin like hers. But when a surprise visitor comes to the istituto just to see Susanna, will the friends be separated after all? Or will a miracle make both of their dreams come true?

Praise For Take Me with You…

Marsden often puts crafts like sewing or crocheting into her stories, and in many respects she is like a master craftsman, using words instead of stitches for her deceptively simple design. The embellishments come in the sensory details of life in the orphanage, on the street, and with the particulars of religious life.
—Booklist (starred review)

Another dream-come-true matchup: Oxenbury and her husband…The handsome, clear-lined images may seem retro at first, but the crispness acts as a containing presence for displacement fears and a source of narrative momentum—all the while allowing Oxenbury to exercise the full power of her visual magic.
—Publishers Weekly (starred)

Carolyn Marsden is the acclaimed author of many novels for young readers. She has a master of fine arts in writing for children from Vermont College and lives in La Jolla, California.
Loading...
or
Not Currently Available for Direct Purchase