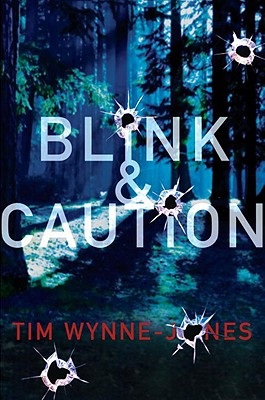 “Blink & Caution begins with two separate storylines, both involving teenagers living on their own in the runaway world of Toronto. Having each left their homes due to traumatic circumstances, they live in dangerous places without the normal structure and limits imposed by a caretaking adult. This unregulated world is the antithesis of true liberty. They are stifled by their freedom and live in a suspended state. Blink & Caution is the story of how their lives become intertwined, and how they provide each other with the fulcrum to climb back into life.”
— Kenny Brechner, Devaney, Doak & Garrett Booksellers, Inc., Farmington, ME
View the List

Two street kids get tangled in a plot over their heads — and risk an unexpected connection — in this heart-pounding thriller by Tim Wynne-Jones.

Boy, did Blink get off on the wrong floor. All he wanted was to steal some breakfast for his empty belly, but instead he stumbled upon a fake kidnapping and a cell phone dropped by an "abducted" CEO, giving Blink a link to his perfect blonde daughter. Now Blink is on the run, but it’s OK as long as he’s smart enough to stay in the game and keep Captain Panic locked in his hold. Enter a girl named Caution. As in "Caution: Toxic." As in "Caution: Watch Your Step." She’s also on the run, from a skeezy drug-dealer boyfriend and from a nightmare in her past that won’t let her go. When she spies Blink at the train station, Caution can see he’s an easy mark. But there’s something about this naïve, skinny street punk, whom she only wanted to rob, that tugs at her heart, a heart she thought deserved not to feel. Charged with suspense and intrigue, this taut novel trails two deeply compelling characters as they forge a blackmail scheme that is foolhardy at best, disastrous at worst — along with a fated, tender partnership that will offer them each a rare chance for redemption.

Tim Wynne-Jones is an award-winning writer of numerous YA novels, including The Uninvited. He lives in Ontario.

Wynne-Jones’ finest, most beautifully written novel yet, one more in a career full of distinguished works
—Kirkus Reviews (starred review)

The story is told in alternating viewpoints, with Blink’s segments in second-person present tense, which adds a heightened sense of immediacy and urgency…Those who enjoy thought-provoking thrillers will not want to miss this novel
—School Library Journal (starred review)

This is gritty, sure, but more than that, its smart, and earns every drop of its hopeful finish.
—Booklist

The crime-drama element of the novel, involving a dispute over corporate uranium mining on Indian-owned land, has enough suspense and action to keep readers interested while they forge a connection with the main characters, whose relationship deepens as they help each other survive immediate dangers as well as the aftereffects of past trauma.
—Horn Book

Over the course of the novel these two damaged children move from darkness toward light and healing, and by the end we are awfully glad of it
—Wall Street Journal

All the elements of a classic noir: a quick thinking leading lady; an unlikely. but decent. hero; a femme fatale with dubious motives; goons with nicknames like “Tank,” “Merlin,” and “Snake”; and, of course, action and suspense.
—Plain Dealer

This novel is charged with suspense and intrigue and trails two deeply compelling characters as they forge a blackmail scheme that is foolhardy at best disastrous at worst along with a fated tender partnership that will offer them each hope.
—San Diego Union Tribune
or
Not Currently Available for Direct Purchase
Copyright © 2020 American Booksellers Association