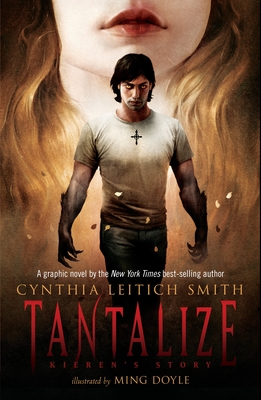 As a hybrid werewolf, Kieren is destined to join an urban Wolf pack and learn to master his shift. Soon, he’ll leave everything behind: home, school, his family, and Quincie, his human best friend . . . who’s beginning to be a whole lot more than a friend. For years, Kieren has managed to keep his desires — and his wolf — at bay. But when the chef at Quincie’ s family restaurant is brutally murdered, Kieren resolves to be there for her, even if it means being framed. Even if it means watching Quincie’s beloved restaurant morph into a vampire lair. But when the new chef begins wooing her, how long can Kieren control his claws? How long can he protect Quincie — and himself? In an elegant graphic edition featuring cinematic sequential art by debut artist Ming Doyle and lush, romantic cover art by Sam Weber , bestselling author Cynthia Leitich Smith re-envisions her delicious dark fantasy through wolfish eyes.

Cynthia Leitich Smith is the acclaimed author of the prose novel of Tantalize as well as Eternal, a New York Times and Publishers Weekly bestseller, and Blessed, all set in the same fictional universe. She says of Tantalize, “An unjust accusation. A true love in peril. It’s enough to make you open your teeth and howl.” A member of the faculty at the Vermont College MFA program in writing for children and young adults, she lives in Austin, Texas.

Ming Doyle was born in 1984 to an Irish-American sailor and a Chinese-Canadian librarian. Since earning her BFA from Cornell University in 2007, she has depicted the sequential exploits of zombie superheroes, demonic cheerleaders, vengeful cowboys, and dapper mutants. Tantalize marks her first full-length graphic novel as well as her first encounter with a were-opossum. She lives in Boston.

This is the graphic novel version of TANTALIZE so it’s a book that might appeal to reluctant readers and to people who really are visual thinkers. It’s gothic, it’s dark. But it also has humor. There’s romance, very sweet romance, and there’s controversy and there’s justice issues and bad boys don’t always get away, but you’re not quite sure.
—NPR Tell Me More

This format- and genre-blending story delivers on several counts as a vampire-werewolf adventure, a mystery, a romance with teeth and claws, an authentic look at diversity (both ethnic and species), and a darn good read.
—Booklist

Leitich Smith, who first published TANTALIZE as a young adult novel, provides a face-paced, twisty, enjoyable ride and compelling characters who develop as the story unfolds. Doyle's illustrations capture the intensity of the emotions between the star-crossed couple.
—Publishers Weekly
or
Not Currently Available for Direct Purchase
Copyright © 2020 American Booksellers Association