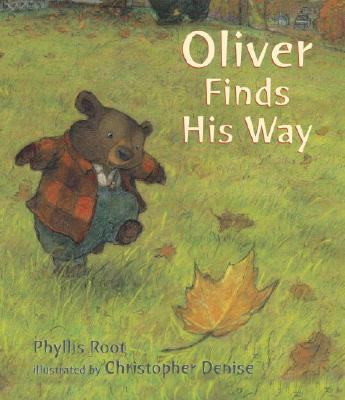 Oliver Finds His Way (Board Books)

"The happy ending is totally satisfying and will leave readers smiling."
-- SCHOOL LIBRARY JOURNAL (starred review)
Oliver is so intent on following a blowing autumn leaf that he doesn't even notice that he's lost his way. All alone at the edge of the woods, he starts to cry. He cries and cries -- but he is still lost. And so he rubs his nose and tries to think. . . . With warmth, humor, and faith in the power of pluck, Phyllis Root quietly captures a big, defining moment in the world of a small child.

in Minnesota with her two daughters. About the inspiration for OLIVER FINDS HIS WAY, Phyllis Root recounts this anecdote from her childhood: "Once when I was very young, the legs I thought were my mother's in a crowd turned out to belong to a stranger. My mother was lost. I hollered really loud, just like Oliver, and my mother found me."

Christopher Denise grew up in New England, and is a graduate of the Rhode Island School of Design. He was drawn to the story of Oliver because, he says, "I couldn't pass up the opportunity to draw scenes of New England in the fall - bright blue skies, brilliant displays of red, yellow, and purple, cool crisp air, long visits to my grandparents' house and, best of all, playing in the leaves." Christopher Denise's first picture book was published in 1994, and since then he has illustrated seven more, including A REDWALL WINTER'S TALE by Brian Jacques.
or
Not Currently Available for Direct Purchase
Copyright © 2020 American Booksellers Association