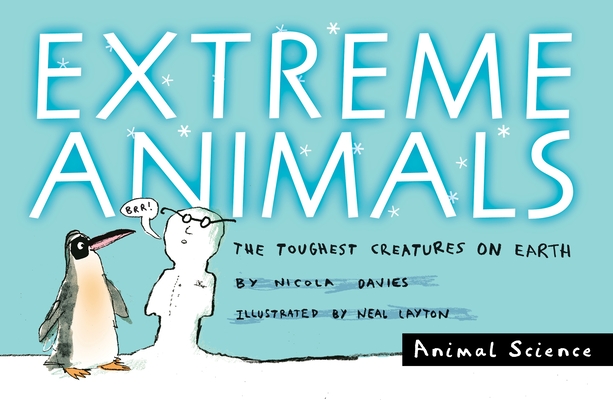 From the persevering emperor penguins of the South Pole to the brave bacteria inside bubbling volcanoes, from the hardy reptiles of the driest deserts to the squash-proof creatures of the deepest seabeds, animals have adapted to survive in conditions that would kill a human faster than you can say "coffin." Discover how they do it in this amazing natural history book from a celebrated team — and find out who wins the title of the toughest animal of them all.
Back matter includes an index and a glossary.

What makes this book a standout is that it manages to integrate very funny humor, gross guts-and-gore, and riveting scientific information.
—The Horn Book (starred review)

Davies’ chatty, funny text and Layton’s colorful cartoons illustrations, as playful and immediate as they were in Davies <i>Poop </i>(2004), will pull kids into the fascinating book about survival.
—Booklist (starred review)

Nicola Davies graduated with a degree in zoology before becoming a writer, producer, and presenter of radio and television programs. She lives in Somerset, England.

Neal Layton received distinction for his M.A. in illustration from Central Saint Martins College of Art and Design, in London, and has been illustrating books for children ever since. He lives in Portsmouth, England.
Loading...
or support indie stores by buying on