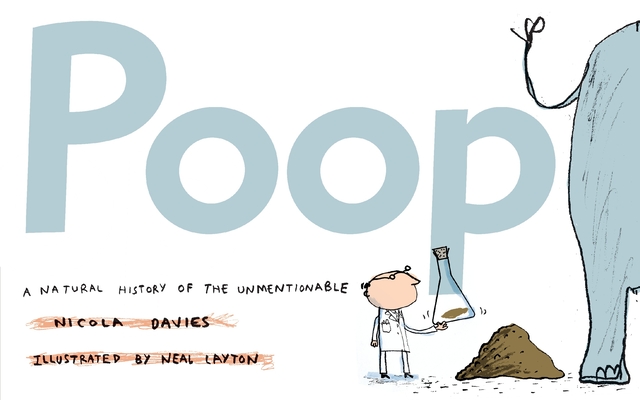 A Natural History of the Unmentionable (Animal Science)

"Playful, but filled with information, this book takes poop out of the sewers and into the scientific community where it belongs." —The Horn Book

Hippos navigate by it, sloths keep in touch through it, dung beetles eat it . . . and most grown-ups would rather not mention it. But scientists who study animal feces find out all sorts of things, such as the number of insects a bat eats or just how a T. rex devoured a triceratops 70 million years ago. Poop is an excellent prototype for recycling and perhaps the most useful stuff on Earth. Take a peek at Poop and find out what it’s for, where it goes, and how much we can learn from it.
Back matter includes an index and a glossary.

Nicola Davies graduated with a degree in zoology before becoming a writer, producer, and presenter of radio and television programs. Her award-winning books for children include BIG BLUE WHALE, ONE TINY TURTLE, SURPRISING SHARKS, and BAT LOVES THE NIGHT. She says, "As a zoologist, you are never far from poop! I've baked goose poop in an oven with my dinner, looked at bat poop under the microscope, and had my T-shirt stained pink with blue-whale poop. I was obviously fated to write this book." Nicola Davies lives in Somerset, England.

Neal Layton has illustrated many well-received picture books, including THE SUNDAY BLUES, which he also wrote. About this project, he says, "I used pencils, paint, pens, ink, pieces of collage, photocopiers, a computer, bits of stick, an old toothbrush, dough, a cake-icing bag, and a camera to make the illustrations for POOP. I had so much fun and learned lots, too!" Neal Layton lives in Portsmouth, England.
or support indie stores by buying on
Copyright © 2020 American Booksellers Association