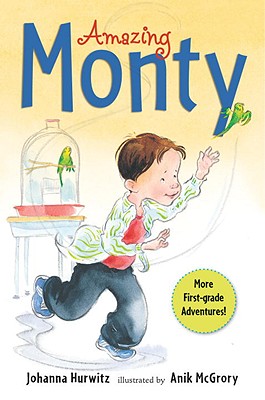 A new sibling is just one of the surprises — some good, some not so much — awaiting Monty in another story for early chapter book readers.

It’s because six-year-old Monty is such a great reader that he finds out about a free pair of parakeets in need of a new owner. And though Yankee and Doodle end up in his classroom, not his own house, unexpected things are happening at home as well. First there’s the tooth that finally falls out, then the amazing news that Monty will have a new brother or sister. But one surprise — the carwash his friends Ilene and Arlene find exciting — turns out to be more of an asthma trigger for Monty than a treat. In this gently humorous adventure, Monty faces the unpredictable, everyday turns of a first-grader’s life with his usual lovable charm.

Johanna Hurwitz is the award-winning author of more than sixty books for children, including MOSTLY MONTY, MIGHTY MONTY and the Riverside Kids series. She divides her time between Long Island, New York, and Wilmington, Vermont.

Anik Scannell McGrory is the illustrator of all three Monty stories as well as several other books for children. She lives in Tarrytown, New York.
Loading...
or
Not Currently Available for Direct Purchase