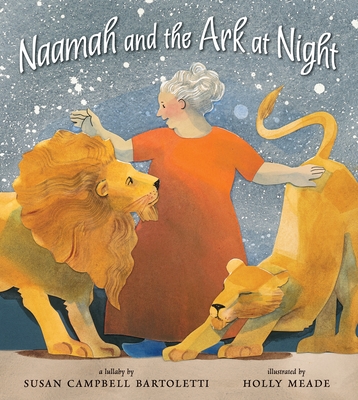 Naamah and the Ark at Night

As Noah’s wife sings the animals to sleep, an age-old tale is told afresh in a soothing poetic form brought to life with beautiful collage illustrations.

Naamah is the wife of Noah, and her name means "great singer." For forty days and forty nights, as the ark tosses on storm-wracked seas, Naamah sings. She sings to the animals, two by two. She sings to her husband, her sons, and their wives. She sings, and they all sleep, finally at peace. Acclaimed author Susan Campbell Bartoletti’s rhythmic, lyrical text pairs with Caldecott Honor winner Holly Meade’s luminous collage for a cozy, tender lullaby, and an ode to the power of song.

Praise For Naamah and the Ark at Night…

Lovely and lyrical...Bartoletti and Meade take a most familiar story and make it breathtakingly new.
—Booklist (starred review)

Sunlit figures with a peaceful absence of detail contrast with quietly dramatic, near-black silhouettes. Affection between pairs warms many a scene.
—The Horn Book (starred review)

The text has a lovely, soothing effect, with the repeated ending words and a lilting cadence that effectively suggests a comforting lullaby. Meade's watercolor collage illustrations match the dramatic pacing of the text with varied perspectives and humorous views of the sleeping (or prowling) animals. . . . This captivating interpretation creates a remarkable partner for Noah, who uses her special talent in a memorable way.
—Kirkus Reviews (starred review)

Holly Meade has illustrated many picture books, including David Elliott’s On the Farm and In the Wild, as well as the Caldecott Honor–winning Hush! A Thai Lullaby and its follow-up, Peek! A Thai Hide-and-Seek, both written by Minfong Ho.Holly Meade lives in Maine.
Loading...
or
Not Currently Available for Direct Purchase