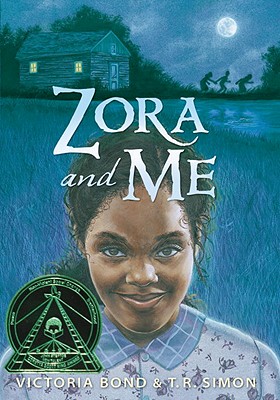 “Because I live in Florida and this novel features a young Zora Neale Hurston, I was intrigued, but this book's charm extends far beyond race and state lines. On one hand it is a great little adventure story, complete with real gators and ghostly soul-stealing Gator Men. But spooky tales pale beside the ugly truths of bigotry and injustice in turn-of-the-century small-town Florida, and murder finds its way to their all-black Eden of Eatonville. Like the best of children's literature, the lessons of community, love, and pride are found in these pages, wrapped in a riveting story children will remember.”
— Leslie Reiner, Inkwood Books, Tampa, FL
View the List

Racial duplicity threatens an idyllic African American community in the turn-of-the-century South in a dazzling debut inspired by the early life of Zora Neale Hurston.

Whether she’s telling the truth or stretching it, Zora Neale Hurston is a riveting storyteller. Her latest creation is a shape-shifting gator man who lurks in the marshes, waiting to steal human souls. But when boastful Sonny Wrapped loses a wrestling match with an elusive alligator named
Ghost — and a man is found murdered by the railroad tracks soon after — young Zora’s tales of a mythical evil creature take on an ominous and far more complicated complexion, jeopardizing the peace and security of an entire town and forcing three children to come to terms with the dual-edged power of pretending. Zora’s best friend, Carrie, narrates this coming-of-age story set in the Eden-like town of Eatonville, Florida, where justice isn’t merely an exercise in retribution, but a testimony to the power of community, love, and pride. A fictionalization of the early years of a literary giant, this astonishing novel is the first project ever to be endorsed by the Zora Neale Hurston Trust that was not authored by Hurston herself.

"It is with sheer genius that Bond and Simon have created something for readers young and old—there are familiar references, like the ‘Brazzles,’ for true Zora-philes, as well as revelatory and wondrous information for those readers as yet uninitiated in the masterful storytelling of Zora Neale Hurston. This is a grand and accessible work that educates, informs, and entertains, and one that I am personally grateful was written for all of us."
—LUCY ANNE HURSTON, niece of Zora Neale Hurston

Victoria Bond and T. R. Simon met ten years ago while working together in publishing and became fast friends. After kicking around the idea of a collaboration for years, the idea of writing a middle-grade novel about Zora Neale Hurston emerged, and both knew they had stumbled into the project of their dreams. Excited and humbled by the opportunity to expose young readers to a seminal figure in twentieth-century American letters, they discovered that Zora’s life as both field anthropologist and writer custom-fit their own backgrounds. T. R. (Tanya) Simon has an MA in anthropology, while Victoria Bond holds an MFA in creative writing.
Loading...
or
Not Currently Available for Direct Purchase