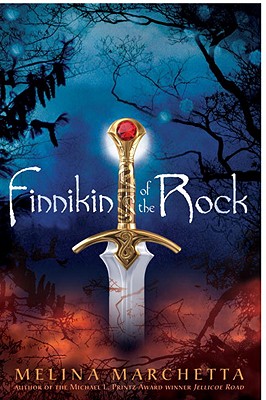 Finnikin of the Rock (Hardcover)

2008 Printz Award Winner Melina Marchetta crafts an epic fantasy of ancient magic, exile, feudal intrigue, and romance that rivets from the first page.
Finnikin was only a child during the five days of the unspeakable, when the royal family of Lumatere were brutally murdered, and an imposter seized the throne. Now a curse binds all who remain inside Lumatere's walls, and those who escaped roam the surrounding lands as exiles, persecuted and despairing, dying by the thousands in fever camps. In a narrative crackling with the tension of an imminent storm, Finnikin, now on the cusp of manhood, is compelled to join forces with an arrogant and enigmatic young novice named Evanjalin, who claims that her dark dreams will lead the exiles to a surviving royal child and a way to pierce the cursed barrier and regain the land of Lumatere. But Evanjalin's unpredictable behavior suggests that she is not what she seems and the startling truth will test Finnikin's faith not only in her, but in all he knows to be true about himself and his destiny.

Melina Marchetta is the acclaimed and award-winning author of JELLICOE ROAD, the Michael L. Printz Award winner, SAVING FRANCESCA, and LOOKING FOR ALIBRANDI. She lives in Australia, where FINNIKIN OF THE ROCK, her first fantasy novel, won an Aurealis Award.

Praise For Finnikin of the Rock…

"The world of this book is dark and beautiful and utterly believable; and, as I’ve come to expect of Marchetta’s work, the characters are wonderfully complex. Here is an author who writes fantasy as well as she writes realism — and in the case of Melina Marchetta, that’s high
praise, indeed!" — Kristin Cashore, author of GRACELING and FIRE — Quote

"A hauntingly beautiful fantasy allegory. . . . A daring departure from Marchetta’s previous books, and it works brilliantly." — THE CANEBERRA TIMES — Quote