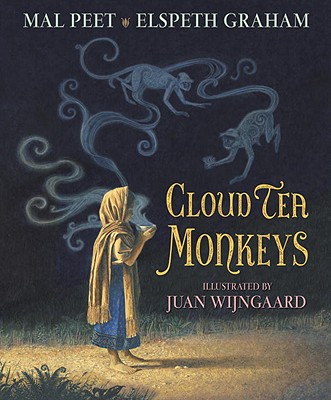 “Steeped in the lore of Himalayan tea picking cultures, this new picture book about a young girl's efforts to help her sick mother is a gem. Readers will love the length, richness, and illustrations, which children will want to revisit often.”
— Angela K Sherrill, 57th Street Books, Chicago, IL
View the List

Carnegie Medalist Mal Peet and his wife, Elspeth Graham, team up for a captivating, lushly illustrated tale evoking a Chinese legend. (Age 4 and up)

Tashi lives in a tiny village at the foot of the mountains, below the tea plantations where her mother works. When her mother falls ill, Tashi goes alone to the plantation, hoping to earn money for the doctor. But she is far too small to harvest the tender shoots, and her clumsy efforts anger the cruel Overseer. She is desolate, until — chack-chack-chack! — something extraordinary happens. Inspired by a centuries-old legend of tea-picking monkeys, here is a richly told tale full of vivid characters: the heartless Overseer, the enigmatic Royal Tea Taster, and — far away — an empress with a penchant for tea.

Mal Peet and Elspeth Graham live in Devon, England, in a house not too far from the sea. Elspeth writes on the ground floor, and Mal writes in the attic. Sometimes they meet in the middle to write books like this one. Elspeth Graham found the seed for the story while writing a book about tea. Mal Peet is the author of such YA novels as KEEPER, THE PENALTY, EXPOSURE, and the Carnegie Medal-winning TAMAR.

Juan Wijngaard has illustrated more than thirty books for children, including SHAKESPEARE'S GLOBE: AN INTERACTICE POP-UP THEATRE and the Kate Greenaway Medal-winning SIR GAWAIN AND THE LOATHLY LADY. He lives in New Mexico.
Loading...
or
Not Currently Available for Direct Purchase