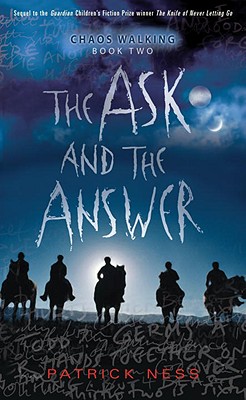 The Ask and the Answer

Part two of the literary sci-fi thriller follows a boy and a girl who are caught in a warring town where thoughts can be heard and secrets are never safe.
Reaching the end of their tense and desperate flight in THE KNIFE OF NEVER LETTING GO, Todd and Viola did not find healing and hope in Haven. They found instead their worst enemy, Mayor Prentiss, waiting to welcome them to New Prentisstown. There they are forced into separate lives: Todd to prison, and Viola to a house of healing where her wounds are treated. Soon Viola is swept into the ruthless activities of the Answer, aimed at overthrowing the tyrannical government. Todd, meanwhile, faces impossible choices when forced to join the mayor's oppressive new regime. In alternating narratives Todd's gritty and volatile; Viola's calmer but equally stubborn the two struggle to reconcile their own dubious actions with their deepest beliefs. Torn by confusion and compromise, suspicion and betrayal, can their trust in each other possibly survive?

Patrick Ness is the author of the critically acclaimed and best-selling Chaos Walking trilogy, as well as the Carnegie Medal winning "A Monster Calls," inspired by an idea from Siobhan Dowd. Among the numerous awards he has received are the "Guardian "Children s Fiction Prize, the Booktrust Teenage Prize, and the Costa Children s Book Award. Born in Virginia, he lives in London."
Loading...
or
Not Currently Available for Direct Purchase