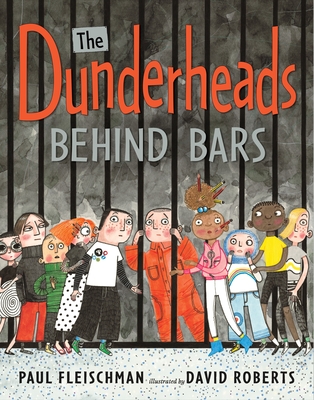 The Dunderheads Behind Bars (Hardcover)

Everyone's favorite underdogs are back! Can they land work on a movie set — and foil a cat burglar — with their unusual and motley skills?

School is out for the summer, and the Dunderheads are finally rid of the awful Miss Breakbone. Or so they thought! Teen star Ashley Throbb-Hart is shooting a movie nearby, and who should show up as an extra but their formidable former teacher! She's not the only Breakbone on the scene, either; after a string of burglaries strikes town, Miss Breakbone steers her barrel-chested brother, Police Chief Breakbone, toward those meddling, good-for-nothing Dunderheads. And when Spider ends up in the wrong place at the wrong time, the blowhard chief has all the evidence he needs to lock him up. Can Einstein, Wheels, Nails, Spitball, Google-Eyes, Clips, Junkyard, Pencil, and Hollywood combine their talents to catch the real criminal before they join their friend behind bars? Newbery Medalist Paul Fleischman and illustrator David Roberts reunite for a delightfully triumphant sequel to The Dunderheads.

Paul Fleischman won the Newbery Medal for Joyful Noise: Poems for Two Voices and a Newbery Honor for Graven Images. Among his award-winning picture books are Sidewalk Circus and Weslandia, both illustrated by Kevin Hawkes; The Animal Hedge, illustrated by Bagram Ibatoulline; and The Dunderheads, for which he won the PEN Literary Award. Paul Fleischman lives in Aromas, California.

David Roberts is the author-illustrator of the Bertie Books and the illustrator of many books for children, including The Dumpster Diver by Janet S. Wong and The Dunderheads by Paul Fleischman, which was short-listed for the Kate Greenaway Medal. David Roberts lives in London.

Praise For The Dunderheads Behind Bars…

Fleischman and Roberts work in perfect synch to deliver a noirish mystery that’s as delightfully eccentric as the kids themselves.
—Publishers Weekly (starred review)

The wry, economical text works in seamless partnership with the stylized, one-of-a-kind watercolor and pen-and-ink illustrations to move the zippy story line forward...The Dunderheads might be “half-pint hooligans” or underestimated budding geniuses, but either way young readers will surely line up in droves for this winning gang’s latest adventure.
—School Library Journal (starred review)

The Dunderheads are back in another amusing caper that’s sure to please fans of their earlier exploits (THE DUNDERHEADS, 2009)... Readers of all ages will enjoy poring over the pages to find the hidden humor. Delightfully smart and deliciously funny—don’t miss it.
—Kirkus Reviews

As diverse as the kids themselves. Roberts re-creates the self-reliant, multi-talented crew from THE DUNDERHEADS with the same wit and panache, the perfect complement to Fleischman’s snappy, kid-friendly narration; a highly entertaining triumph by kids over adults’ summary injustice.
—The Horn Book
or support indie stores by buying on
Copyright © 2020 American Booksellers Association