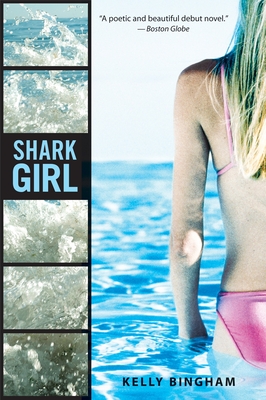 A teenager struggles through physical loss to the start of acceptance in an absorbing, artful novel at once honest and insightful, wrenching and redemptive.

On a sunny day in June, at the beach with her mom and brother, fifteen-year-old Jane Arrowood went for a swim. And then everything — absolutely everything — changed. Now she’s counting down the days until she returns to school with her fake arm, where she knows kids will whisper, "That’s her — that’s Shark Girl," as she passes. In the meantime there are only questions: Why did this happen? Why her? What about her art? What about her life? In this striking first novel, Kelly Bingham uses poems, letters, telephone conversations, and newspaper clippings to look unflinchingly at what it’s like to lose part of yourself — and to summon the courage it takes to find yourself again.

A provocative portrait…powerful without being maudlin or preachy.
—Publishers Weekly (starred review)

This engaging read will entice enthusiastic and reluctant readers; the drama of the shark attack will hook them, and Jane’s inner journey will hold them till the end.
—School Library Journal (starred review)