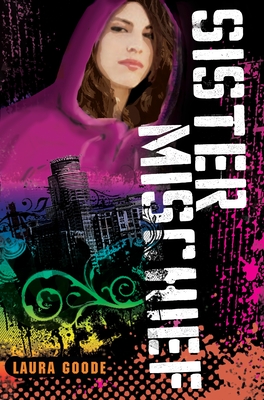 A gay suburban hip-hopper freaks out her Christian high school — and falls in love — in this righteously funny and totally tender YA debut, for real.

Listen up: You’re about to get rocked by the fiercest, baddest all-girl hip-hop crew in the Twin Cities — or at least in the wealthy, white, Bible-thumping suburb of Holyhill, Minnesota. Our heroine, Esme Rockett (aka MC Ferocious) is a Jewish lesbian lyricist. In her crew, Esme’s got her BFFs Marcy (aka DJ SheStorm, the butchest straight girl in town) and Tess (aka The ConTessa, the pretty, popular powerhouse of a vocalist). But Esme’s feelings for her co-MC, Rowie (MC Rohini), a beautiful, brilliant, beguiling desi chick, are bound to get complicated. And before they know it, the queer hip-hop revolution Esme and her girls have exploded in Holyhill is on the line. Laura Goode lays down a snappy, provocative, and heartfelt novel about discovering the rhythm of your own truth.

Laura Goode was raised in Minneapolis and received her BA and MFA in English and Writing from Columbia University. She has written, directed, and produced two full-length plays, and her poetry has appeared in theDenver Quarterly, Cannibal, and Narwhal. She lives in San Francisco.

The novel is notable for the uncommon credit for critical thought it gives its characters, and their ruminations on hip-hop history, sexism, and social alliances are inspiring… A nontraditional approach to an uncommon subject, SISTER MISCHIEF sets the lesbian coming-of-age narrative within a markedly positive hip-hop culture of the characters’ own creation.
—School Library Journal (starred review)

Welcome to the Queer Hip-Hop Revolution, young-adult-style. Transgressive Y.A. novels are all the rage-all the cool kids are reading them. Thus, continuing my desperate, life-long mission to sit at the popular table, I am too. Being a huge supporter of grrrl rockers, I fell hard for Laura Goode's SISTER MISCHIEF.
—Vanity Fair

An irreverent, in-your-face book that deals with sexuality and cultural bias with a big dose of humor interspersed....When the girls defy the school administration to form a gay/straight alliance, they learn what protest is all about. School pranks, gossip, college selection, first love, and bullying are interwoven into this unique novel.
—Library Media Connection

The girls have an encyclopedic knowledge and deep love of hip-hop, and Esme's emotionally charged rhymes flow freely. If ever a book needed a soundtrack—or a beatbox—this is it.
—Publishers Weekly

An odd yet appealing combination of programmatic and subversive, this eminently discussable debut novel captures the vibrancy and messiness of teen life.
—Bulletin of the Center for Children's Books

Snappy banter that can be pretty darn funny. In the end, Esme's story demonstrates to her friends, to the reader and, most importantly, to herself that despite her tough-girl persona, she can love-and live-passionately, openly and well.
—Bookpage

Esme's story demonstrates to her friends, to the reader and, most importantly, to herself that despite her tough-girl persona, she can love-and live-passionately, openly and well.
—Reading Corner (BookPage e-newsletter)

It's not that life is harder when you're a teenager, but the hard stuff is new and peculiar to you, and your options for for dealing with it are limited. It's true that it gets better, but there's also a certain kind of magic that can only happen when things aren't so great. Sister Mischief can teach you how to cast some of those spells.
—The Figment Review
or
Not Currently Available for Direct Purchase
Copyright © 2020 American Booksellers Association