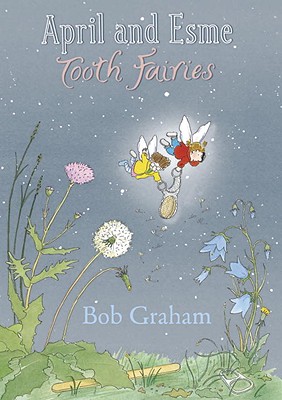 A Junior Library Guild Selection. April Underhill, seven-year-old tooth fairy, gets a call on her cell phone. This is it! Her first tooth collection. April and her little sister, Esme, must convince Mom and Dad to let them take on the task all by themselves. But soon, two tiny fairies fly off into the night, over a highway of thundering eighteen-wheelers, eager to prove how grown up they can be. As always, the charm is in the visual details: the pony-tailed, winged dad in baggy jeans; the snug fairy house with teeth dangling from the rafters like wind chimes. Once again, Bob Graham has crafted a tale of heartwarming adventure, magical yet very real.

Young audiences will linger over the detailed illustrations that bring to life Graham's gentle tale.
—The Horn Book (starred review)

Theres so much wonderful whimsy here, its hard to know what to praise first. As always, a major treat is Graham’s detail-filled artwork, here punctuated by a fairy toilet made from an egg cup and ceiling decorations of hanging teeth. But Graham also slyly covers some interesting issues as well: the cocoon in which parents like to keep their kiddies, alternative families, and the pride and accomplishment children feel with a job well done. Fresh and lots of fun.
—Booklist (starred review)

This is sure to be a favorite with the wiggly-tooth set.
—Bulletin of the Center of Children’s Books (starred review)

Whimsical illustrations and bright colors. Bob Graham uses his talents as an authorand illustrator to give us a peek into an almost believable, tiny world of tooth fairies where dad sports a ponytail, mom has a tattoo, and children carry cell phones
—Library Media Connection

Graham fills his pastel cartoonlike drawings with clever details such as a coffee cup for a bathtub and postage stamps for wall decorations. The story’s marvelous magic glides over the few lapses in logic It’s a loving tale of growing up
—Sacramento Bee

Bob Graham is the beloved author-illustrator of many books for children, including How to Heal a Broken Wing; Dimity Dumpty; “Let’s Get a Pup!” Said Kate; “The Trouble with Dogs . . .” Said Dad; Oscar’s Half Birthday; and Jethro Byrd, Fairy Child. He lives in Australia.
Loading...
or
Not Currently Available for Direct Purchase