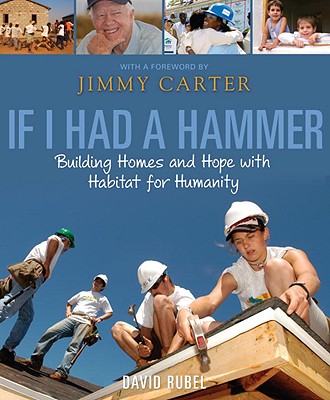 If I Had a Hammer (Hardcover)

Building Homes and Hope with Habitat for Humanity

By David Rubel, Jimmy Carter (Contributions by), Various (Photographs by)

President Jimmy Carter’s compelling anecdotes inspire a personal look at Habitat for Humanity that is sure to fire up a younger generation. (Age 10 and up)

For a quarter-century in more than ninety countries, Habitat for Humanity has built homes in partnership with the people who need them, aided by more than a million multigenerational volunteers. Two of the most devoted are former president Jimmy Carter and his wife, Rosalynn. Now this captivating account, abundantly illustrated with photos, relays personal stories from volunteers and new homeowners with special resonance for young readers. Exploring everything from creative home design to the emotional rewards of helping to build a house from the ground up, this is an essential resource for inspiring future youth volunteers. Included in the paperback edition is a riveting account of building a neighborhood in Thailand for the 2009 Jimmy and Rosalynn Work Project.
Back matter includes an afterword, an index, and information about how to get involved.

Jimmy Carter served as the thirty-ninth president of the United States from 1977 to 1981 and was the recipient of the 2002 Nobel Peace Prize. A prolific author, Jimmy Carter has published more than twenty books. He lives with his wife, Rosalynn, in Plains, Georgia.

Praise For If I Had a Hammer: Building Homes and Hope with Habitat for Humanity…