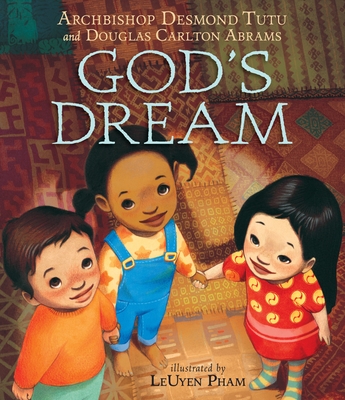 Available in a board book edition! With warmth and humor, Archbishop Tutu distills his philosophy of unity and forgiveness for the very young.

Incandescent graphite, watercolor, and ink illustrations of captivating multicultural youngsters engaged in the carefree pastimes reinforce the overarching themes of love and inclusiveness. The angelic, trusting faces reflect the hope that Archbishop Tutu holds for all the world's children.
—School Library Journal

Archbishop Desmond Tutu won the Nobel Peace Prize in 1984 for his efforts to bring equality, justice, and peace to South Africa. In 1995, Nelson Mandela asked him to lead the Truth and Reconciliation Commission, which became a model of national forgiveness and coexistence. Archbishop Tutu currently chairs the Elders, an international conflict-resolution group. He lives in South Africa.

Douglas Carlton Abrams is the coauthor with Archbishop Desmond Tutu of God Has a Dream: A Vision of Hope for Our Time. He lives in California.

LeUyen Pham is the author-illustrator of Big Sister, Little Sister and has illustrated many other books for children. She lives in San Francisco.
Loading...
or support indie stores by buying on