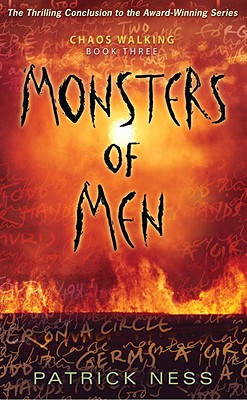 “True to the style of its predecessors, MONSTERS OF MEN is a roller coaster ride of a novel that will keep readers guessing until its final pages. Patrick Ness seamlessly blends the brutal action of his dystopian world with the more tender plights of his characters, and produces a work that will not only keep eyes glued to its pages, but that makes a resounding point about the oppressive nature of humanity, the fragility of relationships, and the impact a few strong voices can have on a world. I absolutely loved it.”
— Julia Ouimet, Merritt Books, Millbrook, NY
View the List

In the riveting conclusion to the acclaimed dystopian series, a boy and girl caught in the chaos of war face devastating choices that will decide the fate of a world.

Patrick Ness, an award-winning novelist, is the author of the acclaimed Chaos Walking trilogy. He has written for England’s Radio 4 and SUNDAY TELEGRAPH and is a literary critic for THE GUARDIAN. Born in Virginia, he currently lives in London.