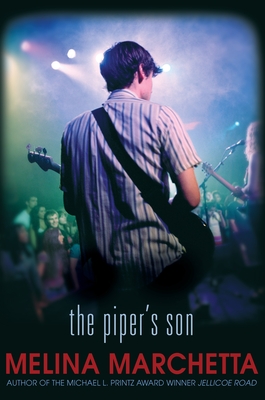 “Melina Marchetta's novels are not easy to read. They are just like life - filled with hard work, complicated, and completely worth the ride. Her characters are people you know, people you love, and people who drive you crazy. The Piper's Son continues the story of friendship and family loyalty that began in Saving Francesca with an equally intense amount of love and compassion shown for all of the characters' weaknesses.”
— Jane Knight, Bear Pond Books of Montpelier, Montpelier, VT
View the List

The award-winning author of Finnikin of the Rock and Jellicoe Road pens a raw, compelling novel about a family’s hard-won healing on the other side of trauma.

Award-winning author Melina Marchetta reopens the story of the group of friends from her acclaimed novel Saving Francesca — but five years have passed, and now it’s Thomas Mackee who needs saving. After his favorite uncle was blown to bits on his way to work in a foreign city, Tom watched his family implode. He quit school and turned his back on his music and everyone that mattered, including the girl he can’t forget. Shooting for oblivion, he’s hit rock bottom, forced to live with his single, pregnant aunt, work at the Union pub with his former friends, and reckon with his grieving, alcoholic father. Tom’s in no shape to mend what’s broken. But what if no one else is either? An unflinching look at family, forgiveness, and the fierce inner workings of love and friendship, The Piper’s Son redefines what it means to go home again.

Praise For The Piper's Son…

A memorable portrait of first love, surviving grief, and the messy contradictions and fierce bonds that hold friends and family together
—Kirkus Reviews (starred review)

Tom’s confusion and regret at dealing with a burgeoning adulthood that’s a pale, twisted shadow of his hopes are depicted with respect and realism, and the slowly unfolding picture of his past adds understanding without entirely getting him off the hook for his own misdeeds.
—Bulletin of the Center of Children's Books

Marchetta uses smart dialogue, email messages, and a bit of humor to slowly draw readers into the complicated social dynamics. It's a joy to watch Tom reconnect with his friends, his music, his family, and Tara, the girl whose heart he broke
—School Library Journal

The family dynamics are realistic, and the sincerity of the ache and joy of the characters as they come together will draw older teens to them rather than just the fictional plot.
—Foreword

Melina Marchetta is the acclaimed and multi-award-winning author of Finnikin of the Rock, an Aurealis Award winner; Jellicoe Road, a Michael L. Printz Medal winner; Saving Francesca; and Looking for Alibrandi. She lives in Australia.
Loading...
or
Not Currently Available for Direct Purchase