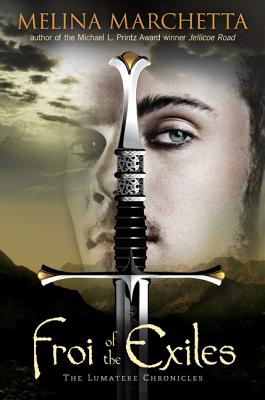 Froi of the Exiles

From master storyteller Melina Marchetta comes an exhilarating fantasy springing from her celebrated epic, Finnikin of the Rock.

Three years after the curse on Lumatere was lifted, Froi has found his home . . . or so he believes. Fiercely loyal to the Queen and Finnikin, Froi has been taken roughly and lovingly in hand by the Guard sworn to protect the royal family, and has learned to control his quick temper with a warrior's discipline. But when he is sent on a secretive mission to the kingdom of Charyn, nothing could have prepared him for what he finds in its surreal royal court. Soon he must unravel both the dark bonds of kinship and the mysteries of a half-mad princess in this barren and mysterious place. It is in Charyn that he will discover there is a song sleeping in his blood . . . and though Froi would rather not, the time has come to listen.

Praise For Froi of the Exiles: The Lumatere Chronicles…

Marchetta again demonstrates her fearlessness in exposing humanity at its ugliest, but also at its noblest, as her damaged characters struggle to rebuild their lives. The precipice on which Marchetta leaves readers will have them aching—but also terrified—to discover what comes next.
—Publishers Weekly (starred review)

In this impressive companion to FINNIKIN OF THE ROCK, the focalization shifts from Finn to Froi (perhaps the most intriguing member of the first book’s superb supporting cast), enabling Marchetta to explore the political machinations working beyond Lumatere and to examine human interactions... Where Finnikin was about the reclamation of something lost, Froi’s story is about the building of something new in the wake of physical and sexual trauma at both an individual and societal level. Fans of the first book are no doubt expecting to be challenged by its sequel, and they will not be disappointed by this thrilling, romantic, and utterly unforgettable tale.
—Bulletin of the Center for Children's Books (starred review)

Marchetta's close attention to detail slows the pace initially, as she lays out the boundaries and topography of her imagined world. But dedicated readers will be richly rewarded, as soon enough the tale is transformed into a lush tapestry in which each stitch is a nugget of history and each splash of color a rounded character that engages readers' emotions. The expertly crafted ending is designed to leave fans old and new waiting with keen anticipation for the next entry... Expect significant attention for this highbrow, high-fantasy sequel.
—Booklist (starred review)

This intricately plotted novel has richly drawn and well-developed characters. This is Marchetta’s strength. She is truly a master of formal, stylized high fantasy. . . The characters and their conflicts, particularly Quintana—one of the most fascinating characters in the fantasy genre—will keep readers glued to this absorbing sequel. Recommend this book to fans of fantasy authors Christopher Paolini or Megan Whalen Turner.
—VOYA

For fans, this is a must-read; newcomers to Lumatere’s story will dive in with enthusiasm.This epic has everything readers can ask for: great characters and a truly spectacular plot filled with romance, suspense, friendship and betrayal.
—Kirkus Reviews

This book is complex, with rich and flawed characters and a plot that is completely addictive because it’s so unpredictable and multilayered. It can stand alone, although plot details from FINNIKIN OF THE ROCK are mentioned, making it more rewarding to read the two in order. Fans of the intricate fantasies of Megan Whalen Turner or George R. R. Martin will love this powerful book and wait impatiently for the next installment.
—School Library Journal

The best audience for this sequel is the many fans of FINNIKIN OF THE ROCK, who will hungrily devour the book, despite its length...The story’s tortured romances and beyond-dysfunctional families are achingly memorable, and the complicated, continually surprising plot will keep readers on their toes... Although readers may throw conniptions over the cliffhanger ending, they will bask in the deep satisfaction of a gripping story gloriously told.
—The Horn Book

In FROI OF THE EXILES, Marchetta has once again created a complex, engrossing world of adventure, intrigue and romance, with strong characters and compelling storylines. Books this good aren’t just for teens.
—BookPage

Melina Marchetta is the acclaimed and award-winning author of Jellicoe Road, which won the Michael L. Printz Award; Saving Francesca and its companion novel, The Piper’s Son; and Looking for Alibrandi. She lives in Australia, where Finnikin of the Rock, her first fantasy novel, won an Aurealis Award.
Loading...
or
Not Currently Available for Direct Purchase