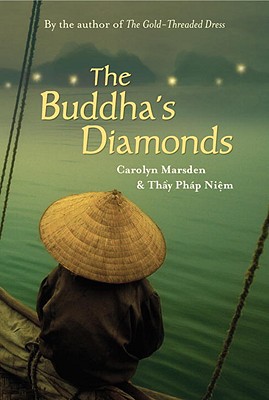 After a storm engulfs his village, a Vietnamese boy has glimmers of a new calling in this spare middle-grade novel written with authenticity and grace. (Ages 8-12)

Every day, Tinhï¿½heads out to sea with his father to catch fish for their family and theï¿½market. While he may miss his simple life, flying kites with other children on the beach, Tinh is proud to work alongside Ba. Then a fierce storm strikes, and Ba entrusts Tinh to secure the family vessel, but the boy panics and runs away. It will take courage and faith to salvage the bamboo boat, win back Ba’s confidence, and return to sea. This graceful tale lyrically narrates a young Vietnamese boy’s literal and spiritual coming-of-age.

Praise For The Buddha's Diamonds…

She held out two pieces of bamboo and some pink paper, a bit of string, and a bottle of glue.

"You brought everything," he said.

"I remembered what you needed."

Tinh stood on tiptoe and looked toward the soccer field. If there was a soccer game oing, he certainly didn't want to spend time with his sister. But it was probably too late to join the game. Plus his cousins would tease him for staying in the temple.

Tinh sat down on a low wall and fastened Lan's bamboo sticks into the shape of a cross. When the sticks were firmly tied, he held the skeleton of the kite to the sky, imagining it floating in the soft blue. Lan wiggled in anticipation. As Tinh lowered the bamboo to his lap and stretched the pink paper over the cross, he thought of how the next day his sister would run along the beach, flying this kite. Last summer, Tinh had also flown kites. But
when he'd turned ten at Lunar New Year, he'd left that childhood behind. Now, during the long days of summer vacation, it was his job to help Ba with the fishing.

Lan put her small finger on the paper while Tinh glued.

"You need more string for a tail," he said when the paper was in place. "And some bits of cloth to tie on to the string."

Just then, Tinh heard the shouts of Trang Ton, Dong, and Anh and then someone shushing them. Then, Tinh heard another sound-like a giant mosquito. He stood up to look. Zooming ahead of the four boys came a miniature red car. Tinh stepped back. The car drove itself. It ran up the dusty path and across the flagstones of the courtyard as if by magic.

The little kids stopped their war games to watch. Adults leaned out the temple doors, fingers to their lips.

"Want to try, Tinh?" Trang Ton held out a small gray box. "Here, you just push this button to go forward, this one to go back. These"-he touched two more buttons-make the car go left and right."

Tinh reached for the remote control. It was heavier than it looked. He tapped the button on the left, and the car drove toward a palm tree. He maneuvered the car around the base of the tree. He drove it to the edge of the stone steps, then backed it up. He loved the feeling of power in his hands.

"Now it's my turn," said Phu, one of Trang Ton's younger cousins.

Tinh handed over the box. This car was a diamond the monk didn't know about. No one in the village could afford a remote controlled car. Trang Ton had an uncle who'd escaped by boat to America. That uncle worked in an office and sent back money and gifts like the soccer ball and the car. The uncle's generosity enabled Trang Ton's family to live in a brick house instead of a hut made of bamboo.

The bell sounded three times, and Phu held his finger over the remote control, poised for action. All eyes were on the red car, now half submerged in a pile of faded bougainvillea flowers. The vibrations stopped, and Phu backed the car up.

The adults emerged from the temple, talking and laughing among themselves. As the nuns spread a feast of fruit on a long table set up in the courtyard, Tinh turned his attention from Trang Ton's red car. He loaded his arms with vanilla mangoes, finger bananas, a stick of sugarcane, and a bunch of longan. He plucked a round longan fruit from the stem and sunk his teeth into the hard skin. The fruit burst open, white and sweet.

Carolyn Marsden says that THE BUDDHA'S DIAMONDS was inspired by a talk given by Thây Phâp Niêm to the children of Deer Park Monastery.

Thây Phâp Niêm’s childhood experiences form the basis of THE BUDDHA'S DIAMONDS. A year after the storm depicted in the story, he escaped postwar Vietnam and became a Buddhist monk. All of his royalties will be donated to the Touching and Helping Programs in Vietnam.
Loading...
or
Not Currently Available for Direct Purchase