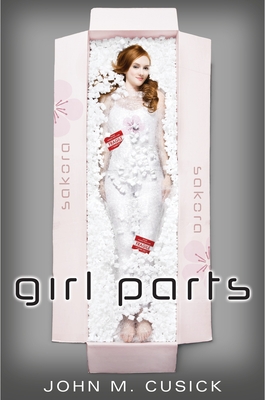 From a debut author! What happens when a robot designed to be a boy’s ideal "companion" develops a will of her own? A compulsively readable novel.

David and Charlie are opposites. David has a million friends, online and off. Charlie is a soulful outsider, off the grid completely. But neither feels close to anybody. When David’s parents present him with a hot Companion bot designed to encourage healthy bonds and treat his "dissociative disorder," he can’t get enough of luscious redheaded Rose — and he can’t get it soon. Companions come with strict intimacy protocols, and whenever he tries anything, David gets an electric shock. Parted from the boy she was built to love, Rose turns to Charlie, who finds he can open up, knowing Rose isn’t real. With Charlie’s help, the ideal "companion" is about to become her own best friend. In a stunning and hilarious debut, John Cusick takes rollicking aim at internet culture and our craving for meaningful connection in an uberconnected world.

Literary agent Cusick’s debut is a funny, touching, near-future science fiction tale that explores teen relationships and what it means to be a “real” person.
—VOYA

With an almost anthropological eye, first-time novelist Cusick digs into the connections people make—physically, emotionally, and technologically.…It’s Rose’s growth, with Charlie’s help after she’s brutally rejected by David, which forms the emotional core of this bittersweet and prescient novel, and which make the teenager-as-robot metaphor work so well.
—Publishers Weekly

This modern fable about the breakdown of interpersonal communication skills in the computer age is also a keenly observed and timely take on relationship building, gender roles and the qualities that make us human.
—Kirkus Reviews

Cusick's first novel is charming and witty, peppered with satirical jabs at the irony of being lonely and isolated in an increasingly connected world.
—Horn Book

Rose, programmed to be naïve, hopelessly romantic, and cheerful, is achingly endearing as she struggles to find her own self under all of the assigned cues. There are moments of absolute raw examination of what it means to feel alone while networked with millions that may shock readers into considering the depth of their own connections.
—Bulletin of the Center of Children’s Books

John Cusick is a 2007 graduate of Wesleyan University. About Girl Parts he says, "It is easy to feel lonely, despite the immediacy of technological connection. This is a story about human connections, how they catch us by surprise and challenge who we are." A literary agent of books for children and teens, he lives in Brooklyn.