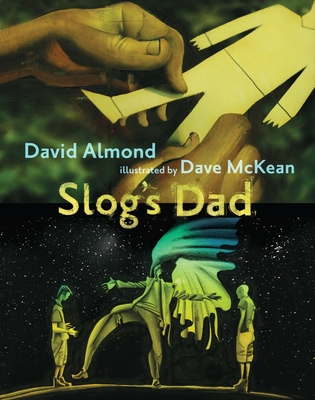 The ineffable nature of grieving and belief inspires a tender, gritty, and breathtaking work of graphic storytelling from the creators of The Savage.

Do you believe in life after death? Slog does. He believes that the scruffy man on a bench outside the butcher shop is his dad, returned to visit him one last time. Slog’s friend Davie isn’t so sure. Can it be that some mysteries are never meant to be solved? And that belief, at times, is its own reward? The acclaimed creators of The Savage reunite for a feat of graphic storytelling that defies categorization. Eerie, poignant, and masterful, Slog’s Dad is a tale of astonishing power and complexity.

David Almond is known worldwide as the Michael L. Printz, Carnegie, Whitbread, and Smarties award–winning author of Skellig, Clay, and many other novels, stories, and plays, including The Savage, also illustrated by Dave McKean. In 2010 he was awarded the Hans Christian Andersen Medal. He lives in Northumberland, England.

Dave McKean is a world-renowned artist, designer, and film director who has illustrated several books for children, including The Savage by David Almond, and Coraline, The Day I Swapped My Dad for Two Goldfish, and The Wolves in the Wall, all by Neil Gaiman. He also provided art and design for Neil Gaiman’s comic series The Sandman. Dave McKean lives in England.
or
Not Currently Available for Direct Purchase
Copyright © 2020 American Booksellers Association