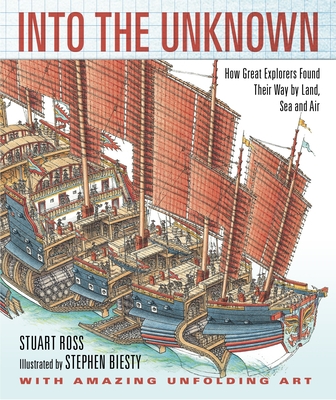 How Great Explorers Found Their Way by Land, Sea, and Air

Ready to relive some of the most daring voyages of all time? Unfold these spectacular cross sections and explore fourteen historic journeys.

Open this dynamic book and discover how the greatest explorers in history — from Marco Polo to Neil Armstrong — plunged into the unknown and boldly pieced together the picture of the world we have today. With the help of masterful cross sections, dramatic storytelling, and sidebars that highlight key concepts, places, and technology, immerse yourself in such expeditions as:
—Leif Eriksson’s voyage to North America (eleventh century)
—Zheng’s travels from China to East Africa (fifteenth century)
—Magellan’s circumnavigation of the globe (sixteenth century)
—Tenzing Norgay’s and Edmund Hillary’s scaling of Mt. Everest (twentieth century)
—Plus ten more exciting journeys!
Back matter includes an index, a glossary, and sources.

Praise For Into the Unknown: How Great Explorers Found Their Way by Land, Sea, and Air…

Ross and Biesty take readers on fourteen historical explorations… Although the human drive for discovery underlies each account, answering the ‘how did they do that?’ question becomes the focus of this remarkable book.
—The Horn Book (starred review)

A true lesson in bravery and perseverance, this book will make your little one marvel at man's constant quest for exploration.
—The Washington Post

Stewart Ross has been writing children’s history books for over 20 years. He has over 200 published titles to his credit that have been translated into more than fifteen languages. He has also taught history all over the world. He lives in Kent, England.

Stephen Biesty’s first book for children, Stephen Biesty's Incredible Cross-Sections, has sold more than a million copies worldwide since its publication in 1992. He lives in Somerset, England.
Loading...
or
Not Currently Available for Direct Purchase