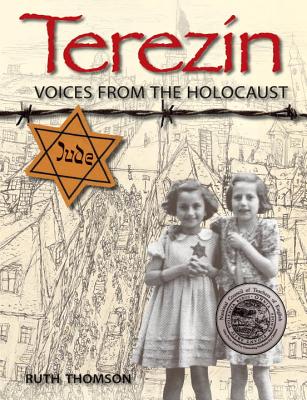 Voices from the Holocaust

Through inmates own voices and artwork, Terezin explores the lives of Jewish people in one of the most infamous of the Nazi transit camps.
Between 1941 and 1945, Nazi Germany turned the small town of Terezin, Czechoslovakia, into a ghetto, and then into a transit camp for thousands of Jewish people. It was a "show" camp, where inmates were forced to use their artistic talents to fool the world about the truth of gas chambers and horrific living conditions for imprisoned Jews. Here is their story, told through the firsthand accounts of those who were there. In this accessible, meticulously researched book, Ruth Thomson allows the inmates to speak for themselves through secret diary entries, artwork, and excerpts from memoirs and recordings narrated after the war. Terezin: Voices from the Holocaust is a moving portrait that shows the strength of the human will to endure, to create, and to survive.

Ruth Thomson is an author and editor of many children s books. She has an MA in museum and gallery education and lives in London."
or
Not Currently Available for Direct Purchase
Copyright © 2020 American Booksellers Association