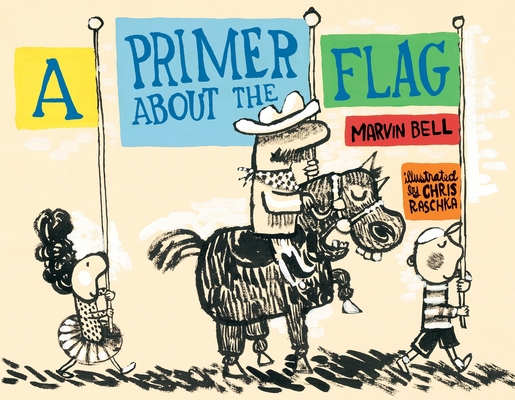 A Primer About the Flag (Hardcover)

We see all sorts of flags every day. But why do we have them, and what are they for? In a book at once playful and thought provoking, Caldecott Medalist Chris Raschka illustrates Marvin Bell’s "A Primer about the Flag," a short poem that raises as many questions as it does flags. Whether brandishing flags that spell out an entire maritime alphabet or little flags that pop out of a gun and say BANG, whether displaying bed-and-breakfast banners or flags on the moon, here is an exploration that may inspire children who are creating their own flags, along with poetry fans and inquisitive minds of all ages.

Marvin Bell is the author of more than sixteen books of poetry and has won numerous awards, including Guggenheim, Fulbright, and NEA fellowships. In 2000 he was named the first Poet Laureate for the state of Iowa. He lives in Port Townsend, Washington, and Iowa City.

Chris Raschka is a Caldecott Medal–winning illustrator of many books for children, including I Pledge Allegiance by Bill Martin, Jr., and Michael Sampson; Dylan Thomas’s A Child’s Christmas in Wales; The Grasshopper’s Song by Nikki Giovanni; and A Poke in the I, A Kick in the Head, and A Foot in the Mouth, all by Paul B. Janeczko. Chris Raschka lives in New York City.

Praise For A Primer About the Flag…