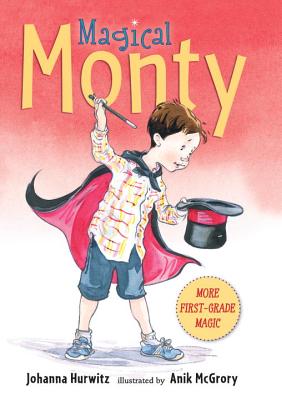 Monty tries to master a magic kit — and finds some real-life situations tricky — in this spot-on story about an endearing, utterly relatable first-grader.

First grade is almost over, and Monty will soon be seven. He’s now a big brother, too, which makes him feel very grown-up. But when he tries to use the magic set his grandmother gave him, he has a little trouble. Maybe the card trick would work if he were eight years old? Mother’s Day is coming, and Monty wishes he had something better to give his mom than the picture frame he made out of ice-cream sticks at school. But how is he supposed to guess from the TV call-in ad how much flowers cost, or that you need a special card to get them? Whether involving his baby sister in his library project, losing a sneaker while marching with his karate class in the parade, or learning that an exciting afternoon isn’t always a good thing, Monty’s familiar adventures embody the gentle humor of everyday life.

Johanna Hurwitz is the award-winning author of more than five dozen books for young readers, including the early-chapter-book series about first-grader Monty. She divides her time between Long Island, New York, and Wilmington, Vermont.

Anik McGrory is the illustrator of the Monty books, as well as several other books for children. She lives in Tarrytown, New York.
Loading...
or
Not Currently Available for Direct Purchase