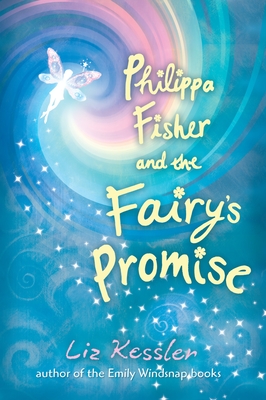 Philippa Fisher and the Fairy's Promise

Can Philippa and her fairy godsister keep the link between worlds from closing forever? A thrilling third tale about a magical friendship.

Philippa is excited to spend her vacation with her friend Robyn, but she has no idea just how much excitement awaits. When a magic spell carved on a mysterious circle of rocks transports Philippa to fairy godmother headquarters, she learns that her own mother is in danger. To protect her mom from a serious accident, Philippa must pretend to be a fairy, while Daisy, her fairy godsister, returns to Earth as Philippa! And that’s just the beginning of their adventure. After passing a harrowing test of their loyalty to each other, Philippa and Daisy undergo a fantastic journey to rescue a lost fairy who has devoted her powers to maintaining the portal of the stone circle. With time running out, and the worlds of humans and fairies at risk of being severed, Daisy finds herself facing an extraordinary choice that has the power to change her life forever.

Liz Kessler is the author of three novels about Philippa Fisher as well as the New York Times best-selling Emily Windsnap series. She lives in Manchester, England.
Loading...
or support indie stores by buying on