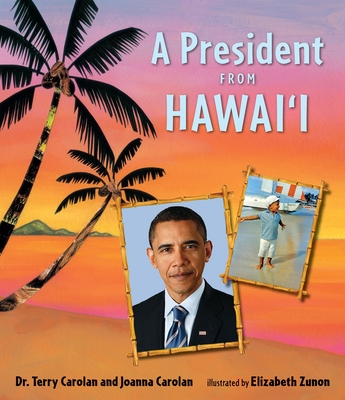 A President from Hawaii

A celebration of President Obama's ties to Hawaii highlights the state's cultural traditions and includes photos from Barack Obama's childhood.

Barack Obama is the first United States President to be born in Hawai‘i, the Aloha State. A President from Hawai‘i — originally distributed exclusively in that state — explores the unique history and cultural traditions of President Obama’s birthplace. In addition to the well-known concept of aloha, it introduces such Hawaiian concepts as kokua (to help), lokahi (unity), and ohana (family), among others, and includes quotes from Barack Obama’s speeches, books, and interviews that reflect and embrace these themes.
Back matter includes a glossary.

Praise For A President from Hawaii…

Part biography, part portrait of the Aloha State, this book covers a lot of ground with a sunny touch.
—School Library Journal

Dr. Terry Carolan was born in Melbourne, Australia, and moved to Hawai‘i in 1977. A pediatrician in private practice on the island of Kaua‘i since 1979, Dr. Carolan has written six other children’s books with Hawaiian themes.

Joanna Carolan was born in San Francisco. Her grandparents moved to Kaua‘i in 1967, and she spent part of her teenage years living with them in Wailua. She is an artist and owner of a studio and gallery on Kaua‘i, Hawai‘i.

Elizabeth Zunon is the illustrator of several picture books, including Lala Salama by Patricia MacLachlan. She lives in Albany, New York.
Loading...
or
Not Currently Available for Direct Purchase