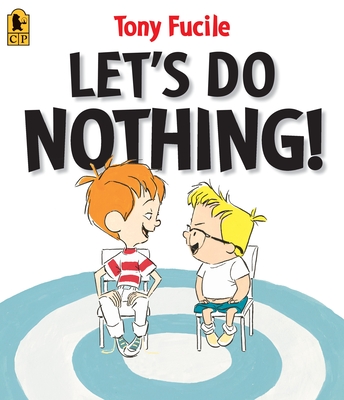 “A hilarious debut told mainly through the zany artwork. . . . The pictures capture the universality of the moment.” — School Library Journal (starred review)

Frankie and Sal have already played every sport and board game invented, baked and eaten batches of cookies, and painted a zillion pictures. What’s left to do? Nothing! Ten seconds of nothing! Can they do it? With a wink to the reader and a command of visual humor, feature-film animator Tony Fucile demonstrates the Zen-like art of doing nothing . . . oops! Couldn’t do it!

Praise For Let's Do Nothing!…

Should leave plenty of chuckles in its wake.
—Booklist

Two boys set out to do nothing. Their imaginative stabs at this elusivegoal…add up to a whole lot of something.
—FamilyFun

Tony Fucile has tapped into an aspect of childhood and adulthood in a sharp and amusing way that should ensure his book shelf space at bookstores and libraries for years to come.
—Books4YourKids.com

Simple illustrations in Let's Do Nothing are balanced with words and thinking moments. These illustrations provide the reader with enough details to giggle out loud, yet there are enough quiet moments of introspection.
—Practically Paradise (SLJ blog)

True artistry…the illustrations mirrored the gaiety inspired by the story, and allowed for the author's humor to really shine through his art as well as his words…shows how to really have fun, even when you don't have a million and one toys at your disposable. A great inspiration for the kids of today's techno savvy, digital age.
—Ready Set Read Reviews blog

Will have kids rolling on the floor.
—Shelftalker blog

A hilarious book that will have kids laughing on every page…guaranteed to ignite the imagination of children everywhere.
—Kendal A. Rautzan’s Books to Borrow, Books to Buy

Two thumbs way up for this terrific book. And there is an added bonus. Wiggly children will sit as still as they are capable of sitting to read Let’s Do Nothing again and again.
—Bookends (Booklist blog)

Fucile’s comic timing is spot-on, and the book is briskly-paced, despite being a book about Doing Nothing…It’s a winner. I hope we see Frankie and Sal again.
—Seven Impossible Things blog

A great book for kids of all ages and would be a wonderful addition to any child’s library.
—Sacramento Book Review

Young readers will have tons of fun, thanks to the amusing situations devised by Tony’s Fucile and his clever drawings.
—Journal Inquirer

Pay close attention to – and point out to your kids – the details, particularly Sal’s facial expressions. Those, alone, are worth seeing over and over again.
—The Bookworm

Fucile is brilliant at conveying emotions and telling the story through pictures and just a smidgen of dialogue.
—GeekDad (Wired.com)

Tony Fucile has spent over twenty years designing and animating characters for numerous cartoon feature fi lms, including THE LION KING, FINDING NEMO, and THE INCREDIBLES, for which he was a supervising animator. LET'S DO NOTHING! is his first book. Tony Fucile lives with his family in the San Francisco Bay area.
Loading...
or
Not Currently Available for Direct Purchase