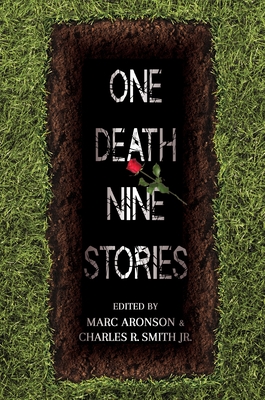 How could one teenage boy’s life elicit other kids’ first experiences — even after he dies? Nine interconnected stories from nine top YA writers.

Kev’s the first kid their age to die. And now, even though he’s dead, he’s not really gone. Even now his choices are touching the people he left behind. Ellen Hopkins reveals what two altar boys (and one altar girl) might get up to at the cemetery. Rita Williams-Garcia follows one aimless teen as he finds a new life in his new job — at the mortuary. Will Weaver turns a lens on Kevin’s sister as she collects his surprising effects — and makes good use of them. Here, in nine stories, we meet people who didn’t know Kevin, friends from his childhood, his ex-girlfriend, his best friend, all dealing with the fallout of his death. Being a teenager is a time for all kinds of firsts — first jobs, first loves, first good-byes, firsts that break your heart and awaken your soul. It’s an initiation of sorts, and it can be brutal. But on the other side of it is the rest of your life.

Praise For One Death, Nine Stories…

The authors included are all well-known young adult writers, such as Ellen Hopkins, Rita Williams-Garcia, and A. S. King, and it is clear that they know and understand their audience. Despite the differing perspectives and characters, the writing is remarkably consistent in tone. The vignette feel of each section may appeal to reluctant readers who can manage a narrative in small chunks without losing the arc of the story itself. More enthusiastic readers will devour it whole.
—School Library Journal

[The characters'] experiences are sensitively portrayed, and they struggle with very real issues of ethnic and sexual identity. ... Complex and emotionally demanding, this collection aims for and will resonate with serious readers of realistic fiction.
—Kirkus Reviews

Rita Williams-Garcia’s fantastic opener introduces Morris, a blank-minded boy working at his uncle’s mortuary the day Kevin’s corpse arrives. Both Ellen Hopkins and A. S. King look at sexual and romantic relationships; Torrey Maldonado examines one of the young men in Kevin’s thrall; and so on. ... Fascinating.
—Booklist

The talents of the writers, including Rita Garcia-Williams, Ellen Hopkins, A. S. King, Will Weaver, and Nora Raleigh Baskin, keep the stories consistently moving and authentically voiced... Useful as a model for a group creative-writing exercise, this would also make for therapeutic reading and discussion in the aftermath of a tragedy.
—Bulletin of the Center for Children's Books

There are plenty of dots to connect and introspection from adolescents on the precipice of something new and unknown.
—Publishers Weekly

Marc Aronson is an editor and author of many award-winning books for young people, including Master of Deceit: J. Edgar Hoover and America in the Age of Lies, and Pick-Up Game, which he co-edited with Charles R. Smith Jr. He lives in New Jersey.

Charles R. Smith Jr. is the photographer of My People, winner of a Coretta Scott King Illustrator Award, and the author of Twelve Rounds to Glory: The Story of Muhammad Ali, winner of a Coretta Scott King Author Honor, as well as co-editor, contributor, and photographer for Pick-Up Game. He lives in Poughkeepsie, New York.
Loading...
or
Not Currently Available for Direct Purchase