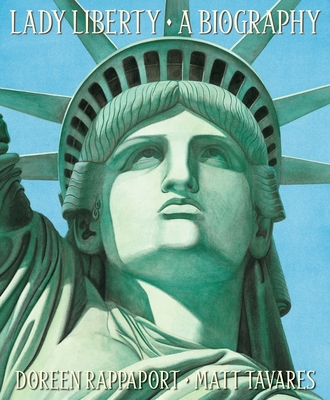 "Tributes to the Statue of Liberty abound, but this stands out for its unusual approach and powerful illustrations." —Kirkus Reviews (starred review)

It begins in 1865 as a romantic idea, but ten years later Édouard Laboulaye’s dream catches fire. Sculptor Auguste Bartholdi gives the dream the form of a lady, holding a torch to "enlighten the world." Engineers, plasterers, carpenters, and coppersmiths work together to turn the lady into a monument more than 100 feet tall. Joseph Pulitzer calls on readers to help fund a pedestal, and hundreds send in nickels, dimes, and even roosters for the cause. Doreen Rappaport’s poetic vignettes and Matt Tavares’s magnificent images remind us of the origins of a national symbol — and show that it took a lot of people to make the Lady. Back matter includes statue dimensions, a time line, an author note, an illustrator note, sources, and suggestions for further reading.

Praise For Lady Liberty: A Biography…

Heartfelt…adds up to a stirring reminder of what Lady Liberty stands for.
—Kirkus Reviews (starred review)

Large in scale and monumental in effect.
—Booklist (starred review)