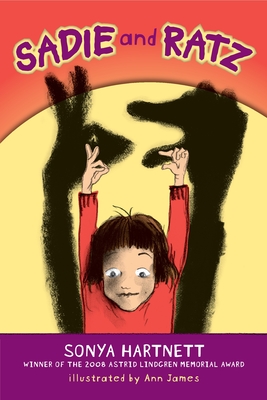 Award-winning Sonya Hartnett spins a tale for younger readers about mischief, siblings, and taking matters into your own hands.

Sadie and Ratz are the names of Hannah’s hands. They aren’t animals, but they behave like wild beasts, says Dad. For one thing, they’re always after four-year-old Baby Boy (whom Sadie wishes were a dog). They jump onto his head and try to rub his ears off. Baby Boy knows how to turn the tables, though, and when he spills milk on the carpet, he tells Grandma that Sadie and Ratz pushed him. But when Baby Boy goes too far, Hannah may have to send Sadie and Ratz on vacation to prove their innocence. Multi-award-winning author Sonya Hartnett brings her original sensibility, wry humor, and engaging characters to a younger audience, aided by Ann James’s inviting illustrations.

Sonya Hartnett is the winner of the 2008 Astrid Lindgren Memorial Award, the world’s largest award for lifetime achievement in children’s and youth literature. She is also the author of many acclaimed young adult novels, including Surrender, The Ghost’s Child, The Silver Donkey, Stripes of the Sidestep Wolf, What the Birds See, and Thursday’s Child. Sonya Hartnett lives in Australia.

Ann James is the award-winning illustrator of more than sixty books for children, including The Midnight Babies, Little Humpty, and Lucy Goosey, written by Margaret Wild, and The Way I Love You, by David Bedford. Ann James lives in Australia.

Praise For Sadie and Ratz…

A piercingly intelligent foray into chapter books...for big sisters and Baby Boys adjusting to each other. A real slice of family life, the sweet with the bitter.
—Kirkus Reviews (starred review)

Lindgren Award–winner Hartnett has been writing for younger and younger readers in recent years, but whether her audience is teenagers, middle-graders, or now chapter-book readers, she remains willing to expose humanity’s more selfish and destructive tendencies, while handling such themes in a way that’s on-target and appropriate for her audience.
—Publishers Weekly (starred review)

Hartnett adeptly conveys the pain and loneliness of an older sibling facing a monumental moment of change and captures what growing up really means to a child. This joyful choice for reading aloud serves as a discussion starter on coping, acceptance, and maturity, and as an instruction manual on personal narratives. There are myriad ways to appreciate this pitch-perfect story.
—School Library Journal (starred review)

This tale of temper and self-control, told in the first person, is more psychologically sophisticated than is usually found in an early chapter book, but the sensitive drawings and clever book design add significantly to the emotional clarity of Hannah’s journey.
—The Horn Book

A Sendakian tale... This, an outstanding chapter book for early readers, is the kind of good writing that all young children deserve.
—Kirkus Reviews Children's Blog

This could be a useful tool for helping young children deal with aggression or explore the complications of sibling dynamics.
—Bulletin of the Center for Children's Books

Pretty much the best book for kids published in America in the year 2012.... A beautiful bit of psychology that will undoubtedly lead to great discussions. Don’t miss it.
—A Fuse #8 Production (SLJ blog)
or
Not Currently Available for Direct Purchase
Copyright © 2020 American Booksellers Association