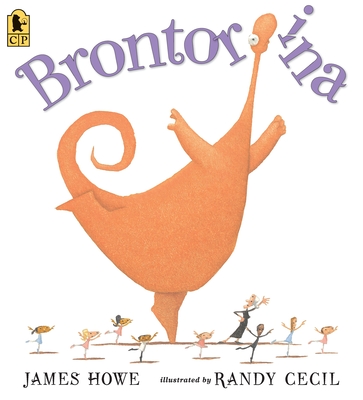 “What happens when a very large, ballet loving, dinosaur wants to come to dance class? Well, in this touching book about acceptance, the dinosaur gets to dance, eventually. Brontorina, who even sounds like a dancer”
— Josie Leavitt, Flying Pig Children's Books, Charlotte, VT
View the List

Brontorina knows, deep in her heart, that she is meant to be a ballerina. James Howe’s lovable dinosaur is of a size outmatched only by her determination, and has talent outmatched only by her charm. Accompanied by Randy Cecil’s beguiling illustrations, here is an irresistible story that proves that no problem is too big when the heart and imagination know no bounds.

Text and illustrations work beautifully together in this witty fantasy. . . . speech balloons alternate with narration to tell the story in a fresh, droll manner. In Cecil’s arresting oil paintings, the tawny orange dinosaur stands out boldly against slate blue or white backgrounds, and the unusual texture of the paint creates a distinctive effect. Brontorina makes a hugely sympathetic heroine.
—Booklist (starred review)

The frankly funny illustrations complement Howe’s understated text, resulting in a sweet, frothy story, complete with tutus and arabesques, for the little (and big) dreamer in everyone, lightheartedly demonstrating that the sky’s the limit, so think big!
—Kirkus Reviews

A humorous and inspiring tale… a satisfying story that adheres closely to its central message about overcoming obstacles.
—Publishers Weekly

A delightful story that reminds us to chase our dreams and to help others chase theirs, even if modifications are required
—Library Media Connection

Young readers will have a ball with James Howe’s story of a dinosaur with a big dream. The dancers include both boys and girls…Brontorina is perfect for a classroom visit or a bedtime story...The message remains en pointe: Go for it, even if you don t have the right build. Or the right footwear.
—Tampa Tribune

A heartwarming tale about holding onto your dreams and never giving up despite ridicule and disappointment Children and parents will love Brontorina’s charm and passion.
—Fort Worth Star­Telegram

James Howe is the acclaimed author of more than eighty books for young readers, including the E. B. White Read Aloud Award-winning Houndsley and Catina and its sequels, as well as the much-lauded series about Bunnicula. James Howe lives in New York State.

Randy Cecil has illustrated many books for children, including Looking for a Moose by Phyllis Root, And Here’s to You!by David Elliot, We’ve All Got Bellybuttons! by David Martin, and My Father the Dog by Elizabeth Bluemle. He is also the author-illustrator of Gator and Duck. Randy Cecil lives in Houston.
Loading...
or support indie stores by buying on