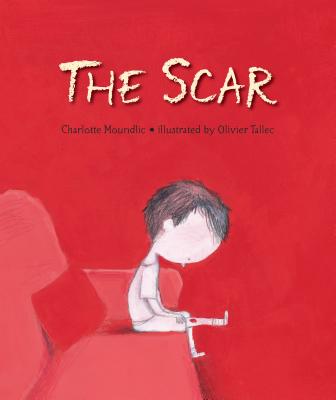 A little boy responds to his mother's death in a genuine, deeply moving story leavened by glimmers of humor and captivating illustrations.

When the boy in this story wakes to find that his mother has died, he is overwhelmed with sadness, anger, and fear that he will forget her. He shuts all the windows to keep in his mother’s familiar smell and scratches open the cut on his knee to remember her comforting voice. He doesn’t know how to speak to his dad anymore, and when Grandma visits and throws open the windows, it’s more than the boy can take — until his grandmother shows him another way to feel that his mom’s love is near. With tenderness, touches of humor, and unflinching emotional truth, Charlotte Moundlic captures the loneliness of grief through the eyes of a child, rendered with sympathy and charm in Olivier Tallec’s expressive illustrations.

Praise For The Scar…

THE SCAR handles its excruciating subject matter beautifully… Tallec’s red-infused acrylic and pencil drawings convey the boy’s every expression with a sensitivity and heart that will move children and adults alike.
—The New York Times

An invaluable resource for adults who need to understand what grief means to a child-and perhaps for a grieving child, as a roadmap through it.
—Publishers Weekly (starred review)

When his mother dies, a little boy reacts honestly to his profound loss in this poignant snapshot of grief. The boy candidly describes his loss and concern for his grieving father with heartfelt immediacy. Simple illustrations stress the boy's distress and isolation while powerfully conveying his progression from anger and fear to sadness and acceptance.
—Kirkus Reviews (starred review)

Charlotte Moundlic is the art director at Pere Castor and the author of several French books for young readers. She lives in Paris.

Olivier Tallec graduated from the Ecole Supérieure des Arts Appliques Duperre in Paris and worked in advertising as a graphic designer before devoting himself to illustration. His work has appeared in many newspapers and magazines, and he has illustrated more than sixty books for children. Olivier Tallec lives in Paris.
Loading...
or
Not Currently Available for Direct Purchase