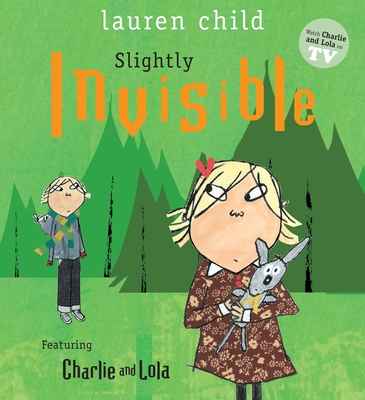 Charlie learns that visibility is relative — but Lola’s quick-wittedness is crystal clear — in this picture book from Lauren Child.

Charlie and his friend Marv have invented an invisibility potion to help them find strange and tricky creatures, which they would prefer to do without Charlie’s little sister, Lola, bothering and interrupting. But when Lola enlists a bit of help from her invisible friend, Soren Lorensen — not to mention a tea set, a rabbit, a stroller, and of course one or three glasses of pink milk — it turns out that the strange and tricky creatures have met their match in one very resourceful, inventive little sister.

"I always wanted a brother, although I doubt he would have been as nice as Charlie. I made him seven because it is one of my favorite ages. I never think of Lola as precocious and certainly not brat-ish - she is one of those children who is just very curious and has quite a strong sense of self. Lots of four-year-olds are like her. There is a retro feel to the whole Charlie and Lola world; the subject is simple and always about the tiny things in life. Tiny things, which can seem very big when you are four or seven."
- Lauren Child — Quote

Lauren Child, a winner of the Kate Greenaway Medal, is the creator of several picture books about Charlie and Lola (who also star in their own TV show) as well as a series of award-winning books about Clarice Bean. She is also the author-illustrator of Who Wants to Be a Poodle I Don’t. Lauren Child was awarded an MBE in 2010. She lives in London.
Loading...
or
Not Currently Available for Direct Purchase