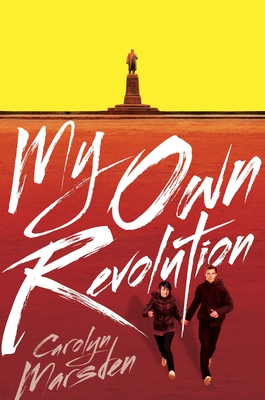 In 1960s Czechoslovakia, Patrik participates in and rebels against the communist regime, knowing that anyone could become an enemy in the blink of an eye.

Fourteen-year-old Patrik rebels against the communist regime in small ways whenever he gets the chance: spray-painting slogans, listening to contraband Beatles records, even urinating on a statue of Lenin under cover of night. But anti-Party sentiment is risky, and when party interference cuts a little too close to home, Patrik and his family find themselves faced with a decision — and a grave secret — that will change everything. As the moments tick toward too late, Patrik takes his family’s fate in hand, risking everything for a chance at freedom. Examining the psychological toll of living under an authoritarian regime, Carolyn Marsden allows readers to experience both Patrik’s persistent worry and his hope for better things.

Praise For My Own Revolution…

Inspired by a true story, this easily accessible novel should appeal to teens who, like Patrik, are keen observers of the chaos that surrounds them.
—Kirkus

The overall story is excellent, conveying feelings of dread, suspicion, despair, and frustration experienced by citizens in Communist Eastern Europe. The relationships among Patrik and his friends and family are realistic and genuine. This novel will open some eyes about how difficult and unfair life was in the Eastern Bloc.–
—School Library Journal

Marsden palpably depicts the paranoia of the time and the stress Patrik’s family is under; there’s an unremitting tension to the second half of the story as they make plans to flee the country. It’s an entirely believable portrait of a boy whose daily life is divided between normal teenage concerns—like winning the girl of his dreams and improving his photography skills—and worries about his very uncertain future.
—Publishers Weekly

Marsden’s carefully researched and engrossing story will be of obvious classroom use but will also appeal to thoughtful independent readers.
—Booklist

Carolyn Marsden is the acclaimed author of The Gold-Threaded Dress and its sequel, The Quail Club, as well as Silk Umbrellas, Moon Runner, When Heaven Fell, The Buddha’s Diamonds (with Thâ`y Pháp Niêm), The Jade Dragon (with Virginia Shin-Mui Loh), Sahwira (with Philip Matzigkeit), Take Me with You, and Starfields.
Loading...
or
Not Currently Available for Direct Purchase