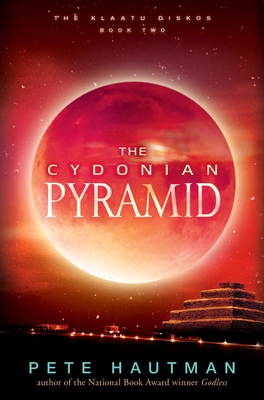 The much-anticipated sequel to The Obsidian Blade transports readers to the terrifying and thrilling world of Lah Lia, the enigmatic girl who changed Tucker Feye’s life.

More than half a millennium in the future, in the shadow of the looming Cydonian Pyramid, a pampered girl named Lah Lia has been raised for one purpose: to be sacrificed through one of the mysterious diskos that hover over the pyramid’s top. But just as she is about to be killed, a strange boy appears from the diskos, providing a cover of chaos that allows her to escape and launching her on a time-spinning journey in which her fate is irreversibly linked to his. In this second volume of the Klaatu Diskos trilogy, Tucker Feye and Lah Lia each hurtle through time, relating their stories in alternating viewpoints that converge at crucial moments. Fans of the first adventure will be intrigued by the chance to see the world through Lah Lia’s eyes — no matter how disturbing the vision might be.

Middle books in trilogies are tricky, but this taut science-fiction thriller pulls it off with panache...Hautman continues to write mind-expanding adventures and nail-biting suspense to probe big questions of faith, destiny and personal responsibility. The next book can’t come soon enough.
—Kirkus Reviews (starred review)

[A] fascinating sequel. ... Hautman doesn’t know how to write a bad book.
—Booklist

Tinged with elements of ancient Mayan sacrifices and political intrigue, the book will have fans of historical fiction and science fiction thinking through the motives and concepts of this smoothly layered adventure.
—School Library Journal

Pete Hautman is the author of many books for young adults and adults, including the National Book Award winner Godless and The Big Crunch, winner of the Los Angeles Times Book Award. About The Cydonian Pyramid, he says, “I could never resist a tough, spunky, conflicted heroine. Following Lahlia through the diskos was an incredible journey. She still scares me a little.” Pete Hautman splits his time between Wisconsin and Minnesota.
Loading...
or
Not Currently Available for Direct Purchase