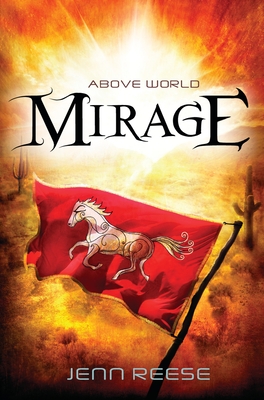 A thrilling sequel from an exciting voice in middle-grade sci-fi tracks two ocean-born children braving the dangers of the Above World.

The desert is no place for ocean-dwelling Kampii like Aluna and Hoku, especially now that Aluna has secretly started growing her tail. But the maniacal Karl Strand is out to conquer the Above World, and the horselike Equians are next on his list. Aluna, Hoku, and their friends — winged Calli and Equian exile Dash — race to the desert city of Mirage, intent on warning the Equians. When they arrive, Strand’s clone, Scorch, has gotten there first. Now the Equian leader has vowed to take all his people to war as part of Strand’s army. Any herd that refuses to join him by the time of the desert-wide competition known as the Thunder Trials will be destroyed. To have any chance of defeating Scorch and convincing the Equians to switch sides, the four friends must find a way to win the Trials. The challenge seems impossible. But if they fail, the desert — and possibly all of the Above World — will be lost to Karl Strand forever. Here is the action-packed follow-up to Above World, which Kirkus Reviews called “a thrilling sci-fi adventure. Imaginative and riveting.”

Jenn Reese writes science fiction and fantasy and has published short stories and two books for adults. She loves martial arts and has trained in kenpo, kung fu, tai chi, and weaponry. She lives in Los Angeles.

Praise For Mirage (Above World #2)…

A powerful sequel with sustained themes of friendship and honor.
—Kirkus Reviews

Readers ... will be rewarded with this sequel. There is plenty of adventure and a well-developed setting that brings the desert to life. ... Hand this book to patrons who appreciate their adventure in fantastic worlds...
—VOYA