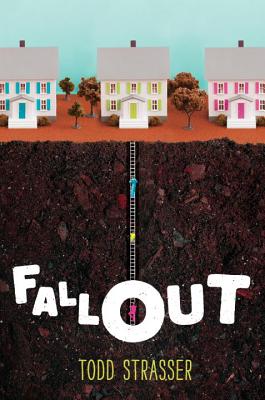 What if the bomb had actually been dropped? What if your family was the only one with a shelter?

In the summer of 1962, the possibility of nuclear war is all anyone talks about. But Scott’s dad is the only one in the neighborhood who actually prepares for the worst. As the neighbors scoff, he builds a bomb shelter to hold his family and stocks it with just enough supplies to keep the four of them alive for two critical weeks. In the middle of the night in late October, when the unthinkable happens, those same neighbors force their way into the shelter before Scott’s dad can shut the door. With not enough room, not enough food, and not enough air, life inside the shelter is filthy, physically draining, and emotionally fraught. But even worse is the question of what will — and won’t — remain when the door is opened again. Internationally best-selling author Todd Strasser has written his most impressive and personal novel to date, ruthlessly yet sensitively exploring the terrifying what-ifs of one of the most explosive moments in human history.

[An] exciting, harrowing new novel... For all its horror, this is a superb entertainment suitable for any tough-minded kid over the age of 10. It thrums along with finely wrought atmosphere and gripping suspense. ... Strasser, a prolific writer for children and teenagers, writes with purpose and economy and structures his book intelligently.
—The New York Times Book Review

Strasser once again combines terrific suspense with thoughtful depth... This riveting examination of things important to a boy suddenly thrust into an adult catastrophe is un-put-down-able.
—Kirkus Reviews (starred review)

An eye-opening “what if” scenario about the human response to disaster.
—Publishers Weekly (starred review)

A well-written, compelling story with an interesting twist on how history might have turned out.
—School Library Journal

[G]ut-wrenchingly credible. ... This title gains its power not simply from its precise detailing of disaster, but from the nuanced treatment of the entire cast of castaways, whose personal backstories are skillfully intertwined with their current behaviors. Accessible to a range of readers, this could be a provocative classroom read as well as a natural pick for disaster fans.
—Bulletin of the Center for Children's Books

Fallout offers an intriguing premise, using near-history as the setting for an all-too-believable dystopia. ... The shelter details are harrowing, realistic, and disturbing but integral to the plot and not at all gratuitous. An author’s note shows the inspiration for the book. Offer this to older fans of dystopia and historical fiction.
—VOYA

Strasser has crafted a memorable piece of alternative history that will leave readers pondering the characters and their choices long after the last page is turned.
—The Horn Book

Tweens and teens will enjoy reading the fast-paced novel about Scott and his pranks, as well as understand the reason bomb shelters were built in the 1960s.
—Library Media Connection

[A] gripping and superbly constructed novel for sophisticated young readers... There's not a word out of place in this evocative book... Mr. Strasser's skill at ratcheting up the tension is, if anything, exceeded by his ability to conjure midcentury ways of thinking...
—The Wall Street Journal

Immerse yourself in our country's past – 1962 to be exact. Become quietly enthralled in Fallout by Todd Strasser with what could've been – had the bombed been dropped.
—Buffalo Grove Countryside

Todd Strasser is the author of more than 140 novels for children and teens, most notably The Wave, which is taught in classrooms around the world. He lives in New York.
Loading...
or
Not Currently Available for Direct Purchase