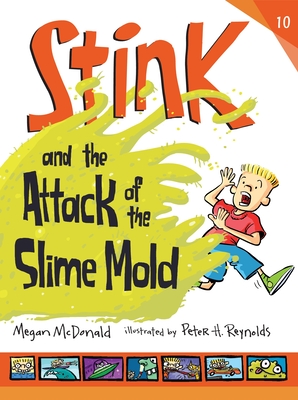 Stink and the Attack of the Slime Mold

Aaagh! Crawl slowly for your lives! Stink kicks off his second decade with a super-funny homage to an oozy-goozy organism.

Glip! Glop! Gloop! What looks like dog vomit, smells like a corpse flower, and stars in one of the scariest movies Stink Moody has ever seen? Is it the Blob? The Glob? Son of Glob? No, it’s . . . slime mold! Stink may be a super science geek, but even Dr. Stinkelstein is feeling freaked out about having a slime mold living and growing in his very own room. At Saturday Science Club, Stink learns that these one-celled organisms are smart enough to find their way out of mazes and gang up on food sources — so who says they aren’t smart enough to take over Stink’s pets, Stink’s room, Stink himself, and . . . the world? Vintage horror flicks meet classic Star Trek episodes as a wary Stink (with some help from Dr. Judy Moody) comes to know and love an unusual new pet in a hilarious adventure that sneaks in factoids and comics at each chapter’s end.

Praise For Stink and the Attack of the Slime Mold…

With a title and jacket that are sure to attract readers, this entry in the Stink series offers a good, simple story, along with snappy dialogue, bits of humor, and plenty of information about slime molds. The large-print text and many illustrations make this a highly accessible choice for readers in the early chapter-book stage.
—Booklist Online

Megan McDonald is the creator of the popular award-winning Judy Moody and Stink series. She is also the author of three Sisters Club stories, two stories about Ant and Honey Bee, and many other books for children. She lives in Sebastopol, California.

Peter H. Reynolds is the illustrator of the Stink and Judy Moody books and the author-illustrator of many picture books, including The Dot, Ish, So Few of Me, and Sky Color. Born in Canada, he now lives in Dedham, Massachusetts.
Loading...
or
Not Currently Available for Direct Purchase