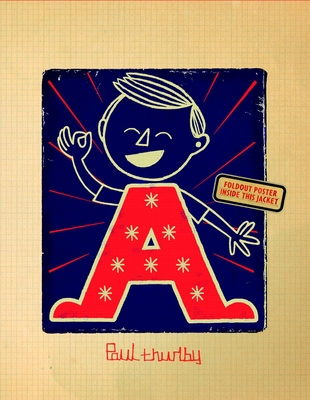 “This amazing new alphabet book showcases fresh and vibrant illustrations. A bonus is the jacket can be reversed and used as a poster. The perfect book for those learning their letters.”
— Lisa Fabiano, Wellesley Books, Wellesley, MA
View the List

In his first picture book, graphic artist Paul Thurlby presents a stunning alphabet that helps to make the shape of each letter memorable. From an awesome A to a zippy Z, this is the perfect ABC book for the young and hip.

Is there any new way left to present the alphabet? The answer is “yes”, as this graphic artist demonstrates when he applies his retro style to the ABCs. . . . Skillfully constructed and cleverly composed, it's an awesome alphabet book that adults will also appreciate.
—Kirkus Reviews (starred review)

Slick, retro-modern design and some cheeky vocabulary choices are the main appeal of this straightforward alphabet book. As a child's introduction to the alphabet and corresponding vocabulary, this is a serviceable addition. However, Thurlby's primary fans will be adults intent on applying an eye for haute design to the acquisition of their children's books and playthings.
—School Library Journal

As is the custom with most such books, we travel in orderly fashion from A to B to C and onward, but here most letters take the shape of an object or idea-or the object or idea takes the shape of the letter, depending-with results that are both surprising and refreshing.
—Wall Street Journal

Each of Thurlby's letters is meticulously conceived — he often uses old books and pieces of paper for backgrounds, and his art has a very stylized, retro feel.
—PRI's The World

In his first picture book, Paul Thurlby makes the most of palette, type and composition...Children may pick up this whimsical volume to learn their letters, but they'll also come away with a heightened aesthetic sense.
—Shelf Awareness Pro

British graphic designer Paul Thurlby plays with type in the most delightful ways...Children may pick up this whimsical volume to learn their letters, but they'll also come away with a heightened aesthetic sense.
—Shelf Awareness for Readers

Little ones learning their letters will find this British designer's take on the illustrated alphabet, in which he assigns each letter a word to display, especially nifty. These modern, collage-type illustrations
are much more appealing than classic alphabet fare and will educate both kids and design-savvy parents.
—ForeWord Reviews

Every letter takes on a special shape in this artsy alphabet.
—San Francisco Chronicle

Paul Thurlby graduated from University of Buckinghamshire and became a full-time illustrator, whose graphic style is instantly recognizable. He is a regular contributor to many publications, including The Guardian, The Times, The Independent, and The Big Issue. Paul Thurlby lives in England.
Loading...
or support indie stores by buying on