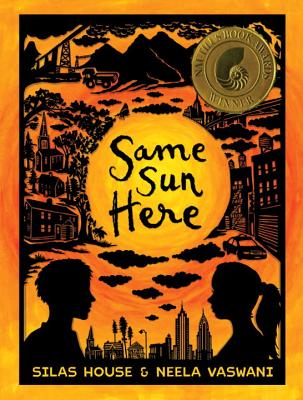 “In this stunning epistolary novel, Meena, an Indian immigrant living in New York City's Chinatown, and River, a boy growing up in rural Kentucky, first become pen pals and then best friends. Through warm, rich imagery Vaswani and House create a story of unlikely resonant rhymes in human lives across seemingly divergent circumstances. The authors integrate the complex political issues of immigration and mountaintop removal, which Meena and River face, with so much dexterity and heart that the reader will feel called to activism. I fell completely in love with these voices and know that they'll stay with me for a while to come.”
— Hannah Manshel, 57th Street Books, Chicago, IL
View the List

In this extraordinary novel in letters, an Indian immigrant girl in New York City and a Kentucky coal miner's son find strength and perspective by sharing their true selves across the miles.

Meena and River have a lot in common: fathers forced to work away from home to make ends meet, grandmothers who mean the world to them, and faithful dogs. But Meena is an Indian immigrant girl living in New York City’s Chinatown, while River is a Kentucky coal miner’s son. As Meena’s family studies for citizenship exams and River’s town faces devastating mountaintop removal, this unlikely pair become pen pals, sharing thoughts and, as their camaraderie deepens, discovering common ground in their disparate experiences. With honesty and humor, Meena and River bridge the miles between them, creating a friendship that inspires bravery and defeats cultural misconceptions. Narrated in two voices, each voice distinctly articulated by a separate gifted author, this chronicle of two lives powerfully conveys the great value of being and having a friend and the joys of opening our lives to others who live beneath the same sun.

Even better than reading a refreshingly honest story by one talented writer is reading one by two such writers. House and Vaswani alternate between the voices of Meena and River. The two connect as pen pals, and their letters reveal the unusual intersections and the stark contrasts in their lives... Readers will feel confident that their friendship will get them through whatever lies ahead.
—Publishers Weekly (starred review)

This tender and breathtakingly honest story about unlikely friendships and finding common ground will captivate readers... In an era when social media permeates every area of our lives, Meena and River’s old-fashioned camaraderie through letters feels refreshing and true. Audiences will revel in this lovely story about a boy and girl who are not so different from one another after all.
—School Library Journal (starred review)

Readers will be held by the kids’ challenges, along with the warm bond they share.
—Booklist

While at its heart a friendship story, this is also a celebration of writing, both as a means of processing emotions and as a vehicle for making the writer more observant of people and places, and both Meena and River come to appreciate and value the role the letter writing plays in their own lives over the course of their relationship. Readers who enjoy differing points of view will particularly enjoy this old-fashioned yet contemporary letter-writing exchange.
—Bulletin of the Center for Children's Books

SAME SUN HERE takes a novel approach to this topic and reveals to young readers how authentic conversation and trust between human beings can bring them together despite all that divides them.
—VOYA

Honest, poignant letters between two 12-year-old pen pals—one Kentucky born and raised, the other born in India and living in New York's Chinatown—demonstrate that the most important things in life are common among us all... A moving novel.
—Shelf Awareness

SAME SUN HERE by Silas House and Neela Vaswani is like a blast of air conditioning from an open door on a baking hot Manhattan day, at once refreshing, relieving, sweet and enlivening. With easy, commanding authority the authors wholly embody the voices of their two characters, far-flung pen pals River and Meena, delivering a story that wrenches the reader with its honesty, clarity and verve.
—The Rusty Key

Written for grades 5 and up, SAME SUN HERE tackles complex societal ills in a thoughtful, uplifting story frame that will captivate readers regardless of age.
—Appalachain Voices

Silas House is the nationally best-selling author of Eli the Good as well as the award-winning novels Clay’s Quilt, A Parchment of Leaves, and The Coal Tattoo. He is an associate professor at Berea College and lives in eastern Kentucky.

Neela Vaswani is the award-winning author of You Have Given Me a Country and Where the Long Grass Bends. Her work has received an American Book Award, an O. Henry Prize, and a ForeWord Magazine Book of the Year Award. She teaches at Spalding University’s MFA in writing program and is the founder of the Storylines Project with the New York Public Library. Neela Vaswani lives in New York City.
Loading...
or
Not Currently Available for Direct Purchase