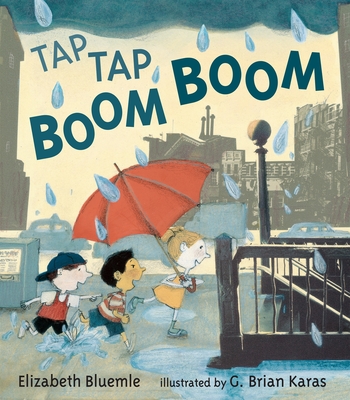 When a thunderstorm hits a city street, children and grown-ups dash to the subway for shelter — and an impromptu friendly gathering.

The clouds are gathering above a city street and soon — tap, tap, boom, boom! As a thunderstorm rolls in, people of all stripes race down to the subway to get away from the crackling rain and wind. With quirky wordplay and infectious rhymes, Elizabeth Bluemle crystallizes an unexpected moment of community, while G. Brian Karas’s warm illustrations show the smiles to be had when a storm brings strangers together as friends.

G. Brian Karas has illustrated more than ninety children’s books, including two books about Ant and Honey Bee by Megan McDonald; Switching on the Moon: A Very First Book of Bedtime Poems, edited by Jane Yolen and Andrew Fusek Peters; and the New York Times Best Illustrated Children’s Book Are You Going to Be Good? by Cari Best. G. Brian Karas lives in the Hudson Valley of New York.
Loading...
or support indie stores by buying on