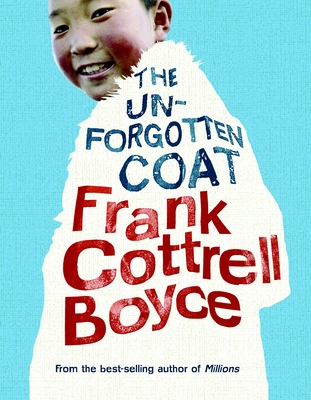 From the best-selling author of Cosmic and Millions comes an evocative immigration tale about two brothers trying to survive— a daring story that miraculously defies belief.

When two Mongolian brothers inexplicably appear one morning in Julie’s sixth grade class, no one, least of all Julie, knows what to do with them. But when Chingis, the older of the two brothers, proclaims Julie as their “Good Guide” — a nomadic tradition of welcoming strangers to a new land — Julie must somehow navigate them through soccer, school uniforms, and British slang, all while trying to win Shocky’s attention and perhaps also an invitation to her friend Mimi’s house. At times funny, this moving and simply told novella tugs at the heart — a unique story of immigration both fierce in its telling and magical in its characters.

Praise For The Unforgotten Coat…

Frank Cottrell Boyce has written several children's books, including Millions, winner of the Carnegie Medal, and Cosmic, both of which have been turned into films. This is his first book with Candlewick Press. He lives in England with his family.

Carl Hunter and Clare Heney are both filmmakers who have partnered on a number of short films, including an adaptation of Frank Cottrell Boyce's short story Accelerate. They live in England.
Loading...
or support indie stores by buying on