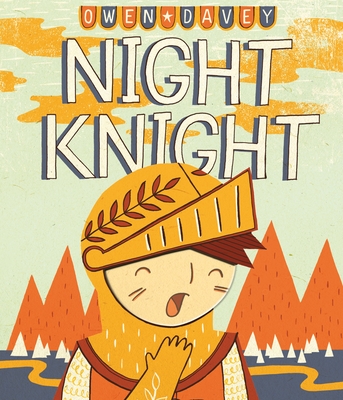 Come on a bedtime adventure with one little knight as he rides through forests to reach his bedroom, battles crocodiles to brush his teeth and climbs the tallest tower to get into bed. This exciting and imaginative bedtime tale is told through Owen Davey's charming and witty words and illustrations — making this a perfect k-nightly read for every young adventurer.

Davey, a British illustrator, uses a striking palette of ocher, orange and cinnamon in this delightful debut, which recreates the imaginative pre-bedtime rituals of the aspiring titular knight. Simple, sweet and bound to induce sleep.
—The New York Times

Every spread of this visually stunning British import is suitable for framing. Hip, stylized, beautifully composed cut-paper collages evoke the rich ornamentation of any self-respecting medieval fantasy, all saturated in a warm palette of deep gold, burgundy, rusts and oranges on what looks like handmade paper...A visual feast for very youngest fans of knights and castles.
—Kirkus Reviews

Imagination melds with nighttime routine as the boy rides a unicorn through a forest (the hallway), climbs up a steep mountain (stairs), plunges into a swirling sea (bath), and says “night night” to a three-headed beast (dog) before returning to his castle (room) and crawling into his tower (bed). The book’s simple but enticing premise is fleshed out with artwork that uses heraldic hues of burnished orange and yellow and crisp graphic shapes for a warm, inviting look. A spread of the various objects the boy puts away—a sword, a jewel, a crown, a shield—will float in children’s minds as they nod happily off into the adventures of slumberland.
—Booklist

With kinetic folk-art patterns in rich, subtle colors, [the illustrations] show the young narrator as he takes readers through dense forests, up steep mountains, into large squid- and serpent-filled seas, and past a three-headed dragon. Children faced with the humdrum prospect of getting ready for bed need only look at NIGHT KNIGHT to remember that adventure is lurking everywhere…
—School Library Journal

Owen Davey’s NIGHT KNIGHT transforms every element of a typical, boring bedtime routine into something fantastical...The artwork, self-described as “contemporary and nostalgic,” calms in warm, muted brick tones, even as the imagined action busies itself with mythical creatures and noble exertions. Preschool and kindergarten children and parents will dub this daydream royally engaging.
—BookPage

Boy howdy and howdy boy, do I like these illustrations. This is simply the story of a young boy heading to bed, but there’s nothing simple about the imaginative spreads here. In his mind, you see, the boy is a knight and “going to bed…is a great adventure.” (Cue “ye olde yawn,” my favorite part of the book.)
—Seven Impossible Things blog

A bedtime adventure for your little knight of the round table. After defeating Rex, the three-headed dragon, he’ll be ready for some shut-eye.
—DailyCandy Kids

Here's hoping the boys in your lives fall asleep to dreams of knights and adventures after reading this latest addition to your library.
—Huffington Post Parents blog

Owen Davey describes his style as contemporary and nostalgic and likes to use a palette of warm, muted colours. His work has been featured in the New York Times and Jamie Oliver’s food magazine. Owen has had many knightly adventures around where he lives in Bristol, England.
Loading...
or
Not Currently Available for Direct Purchase