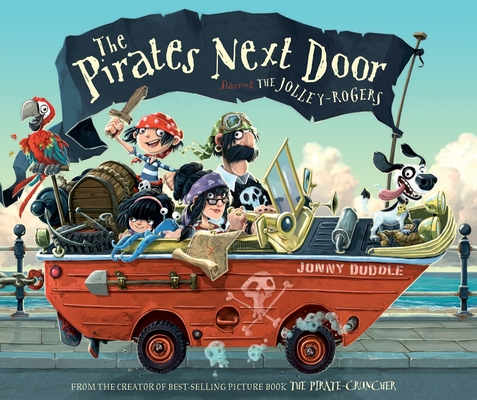 The Pirates Next Door

The Jolley-Rogers have traded in the high seas for suburban life.

Meet the Jolley-Rogers — a pirate family who is moving to Dull-on-Sea, a quiet seaside town, while they fix up their ship. This unusual family soon has the whole neighborhood gossiping. Defying the grown-ups, Matilda becomes friends with young pirate Jim Lad. When the JolleyRogers return to sea, the town realizes that they were wrong to assume the worst when it is discovered that the pirates have buried treasure in everyone's yard. The neighbors are thrilled, but Matilda is sad to have lost her new friend, until she discovers her own treasure — a pen pal!

Praise For The Pirates Next Door…

Duddle’s rhymes have the buoyant, singsong quality of a sea shanty... he does an excellent job of exaggerating the pirates’ slightly menacing yet silly appearance and the concerned glances and raised eyebrows of the unwelcoming community.
—Publishers Weekly

Veiled in humor, but hard not to read as a parable that tweaks narrow minds and parochial attitudes.
—Kirkus Reviews

The digital art features slightly exaggerated figures that could easily have stepped out of an animated film... The real fun comes in the contrast between the visual minutiae of the pirate family and the depiction of the “normal” people. It’s in no way subtle, but pirate-wannabes won’t bat an eye patch.
—The Bulletin of the Center for Children's Books

We've all wanted to run off and be pirates sailing the seven seas and shouting "Argh" at people, but how many of us have had pirates move in next door? Matilda has.
—Huffington Post Parents blog

Jonny Duddle is an illustrator and concept artist for films, including The Pirates! by Aardman animation. His first book, The Pirate Cruncher, was long-listed for the Kate Greenaway Medal. Having sailed the high seas in a square-rigger, Jonny is now in danger of becoming a landlubber. He lives with his wife and their daughters in Wales.
Loading...
or support indie stores by buying on