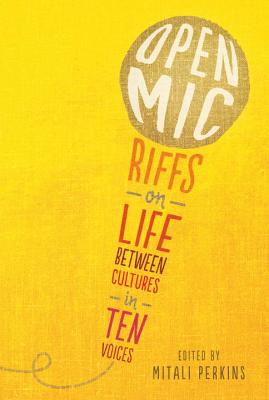 Listen in as ten YA authors — some familiar, some new — use their own brand of humor to share their stories about growing up between cultures. Henry Choi Lee discovers that pretending to be a tai chi master or a sought-after wiz at math wins him friends for a while — until it comically backfires. A biracial girl is amused when her dad clears seats for his family on a crowded subway in under a minute flat, simply by sitting quietly in between two uptight white women. Edited by acclaimed author and speaker Mitali Perkins, this collection of fiction and nonfiction uses a mix of styles as diverse as their authors, from laugh-out-loud funny to wry, ironic, or poingnant, in prose, poetry, and comic form.

Praise For Open Mic: Riffs on Life Between Cultures in Ten Voices…

[W]ill leave readers thinking about the ways that humor can be a survival tool in a world that tends to put people in boxes.
—Publishers Weekly

[A] noteworthy anthology, which robustly proves Perkins’s assertion that “funny is powerful.”
—The Horn Book

The stories are varied in format ... [b]ut all invite sometimes rueful smiles or chuckles of recognition. And all demonstrate that in the specific we find the universal, and that borders are meant to be breached.
—Booklist

Teachers will find some powerful material here about how the young can become discomfited and find solace in their multifaceted cultural communities. ... Purchase where schools seek useful pieces about YAs who identify with multiple cultures.
—School Library Journal

It’s often said that good literature for young people can act as a mirror to one’s own experiences and a window into others’ — this anthology fills the bill, providing an accessible assessment of contemporary race relations, while also being as honest, refreshing, and frank as the titular open mic suggests.
—Bulletin of the Center for Children's Books

Perkins organizes the stories wisely in this collection that hopes to put a humorous spin on a topical, deeply uncomfortable subject... These tales in particular dance between humor and heartache, ending on notes of triumph as we look toward a hopeful future.
—VOYA

Mitali Perkins is the author of numerous books for teens and younger readers, including Monsoon Summer and Secret Keeper. She was born in India and immigrated to the United States with her parents and two sisters when she was seven. Mitali Perkins lives with her husband just outside of Boston, Massachusetts.
Loading...
or support indie stores by buying on