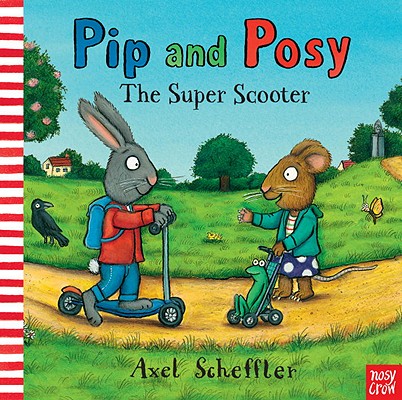 Introducing Pip and Posy from Nosy Crow, an imprint of Candlewick Press!

Pip’s playing happily with his scooter in the park when Posy comes along and decides that she wants to have a turn. But she doesn’t know how to ride a scooter, and Pip has to come to the rescue.

Praise For Pip and Posy: The Super Scooter…

In Axel Scheffler’s sweet story, a rabbit named Pip is zipping through the park on his scooter when he meets his mouse friend, Posy, who wants to try Pip’s scooter. The distress we see on Pip’s face will resonate with any child who has ever been in his position: Your friend may really like your toy, but you really, really don’t want her to take it! The final scenes of reconciliation bring these stressful events to a gentle, age-appropriate conclusion.
—Wall Street Journal

Two animal pals navigate early childhood friendship with heart and humor... The gouache illustrations done in bright colors are as sweet and playful as the stories, and the endearing young creatures have humorously expressive faces. These tender and funny stories will entertain young children.
—School Library Journal

Illustrated by Axel Scheffler, whose books have been translated into twenty-nine languages and include the modern classic The Gruffalo, which has sold over two million copies worldwide.
Loading...
or support indie stores by buying on
(This book is on backorder)